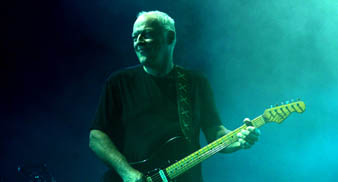 David Gilmour will release a double live album with a DVD on September 15.

The release documents his landmark gig in the Gdansk Shipyards, including the first ever performance of Pink Floyd classics ‘High Hopes’ and ‘A great day For Freedom’ with an orchestra.

In 2006 Pink Floyd’s singer and guitarist appeared in front of 50,000 people to celebrate the 26th anniversary of Solidarity, the trade union that eventually ended communist rule in Poland.

The Gdansk event came at the end of Gilmour’s ‘On An Island’ tour, which saw the six members – including Roxy Music‘s Phil Manzanera, who also co-produced the DVD – playing with a 40 piece string section.

“This was the first time I have played in Poland and it was a thrill to be there helping to mark one of the most important anniversaries in recent European history,” said Gilmour.

“The Gdansk shipyard is a deeply symbolic place and it was an honour to perform our music there. It was particularly exciting to have my friend Zbigniew Preisner there conducting the Polish Baltic Philharmonic Orchestra and to be able to perform my album for the first time as it was intended.”

The DVD contains 113 minutes of concert footage and a documentary of Gilmour’s private meeting with former Polish President Lech Walesa, chats with the band and crew, and rehearsals.

Five different versions of the package will be released: ranging from the basic three disc collection to a five disc deluxe box set with collectable memorabilia items and, for the really hardcore, a five LP set including a version of ‘Wot’s… Uh The Deal?’ and private recording sessions known as the ‘Barn Jams’.