Daft Punk Team Up With Kanye West On New Album 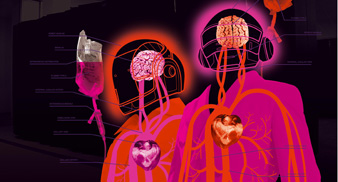 Daft Punk and Kanye West have teamed up for a new track “Stronger” which samples DP’s “Harder, Better, Faster, Stronger” from their 2001 album “Discovery.”

“Stronger” will be the first single to be taken from Kanye West’s third album “Graduation” and is expected to be released on June 1. The album will follow in September.

The video, directed by veteran music film maker Hype Williams was filmed a fortnight ago on a beach in Los Angeles.

Uncut can exclusively reveal that the Daft Punk trademark robots make their appearence, emerging from the sea.

West also got the crowd extremely worked up with a quick run through of favourites from albums “The College Dropout” and “Late Registration” including massive club hit “Touch The Sky.”

The exclusive party show was part of the Heineken Global Thirst Sessions weekend, promoting diversity in music, held at the Tao Beach Club.

To find out who won the chance to have their track reworked by top US DJs Gabriel and Dresden at Palm Studios, and also for Uncut.co.uk’s exclusive Kanye West sing-a-long interview, check back here soon.

To check out photos and streams from the Heineken weekend, click here for thirststudio.com where a gallery will appear in the next few days