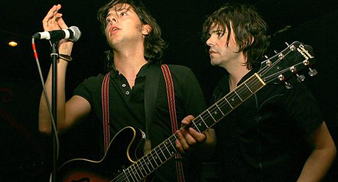 Death Disco TV will feature three bands playing to a live audience at London’s Cuckoo Club. The first of the monthly programmes will feature The Holloways, Reverend and the Makers, and The Chavs – the supergroup formed by former Libertine Carl Barat with the Charlatans’ Tim Burgess, Razorlights’ Andy Burrows and Primal Scream’s Martin Duffy.

McGee who is renowned for signing Oasis, says the opportunity to make programmes is a great thing. He commented: “When they suggested doing a TV version of Death Disco it really appealed to me. It’s a chance to showcase some great new music to a wider audience and that’s got to be a good thing.”

Starting on June 10, “Gary Crowley Presents…” will feature a mix of live, acoustic performances with interviews with artists. The first episode will see sets and chat with former Sex Pistol Glen Matlock and newer bands The Bishops and The Draytones.

Rockworld.TV is available on SKY channel 368 and on demand through their IPTV platform online here