She's posted her many resolutions online 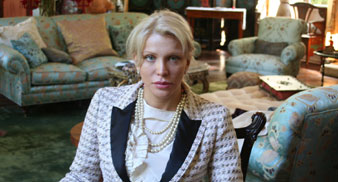 Eccentric singer Courtney Love has posted her New Year’s resolutions online, and there are an awful lot of them!

Amongst the 53 rambling but noble resolutions, as well as the usual ‘stop smoking/drinking’ she wants to let us know that that she “will chant for the war in Iraq to cease asap.”

The widow of Nirvana front man Kurt Cobain also says that this year would be the best since his death in 1994. She resolves to “know that 07 is going to be the very best year of my entire life to date and know that Kurts spirit is tended to and tend to it daily.”

Love also tells us more about the progress of her new solo album, which is nearing completion – she says she needs to “get this last song- if needed w LP.”

The singer who currently has no record deal to release the new album states that there are offers on the table. She resolves to make a decision about which label to go for, saying she will “sign with one of the two deals on the table , asap, (after the hols both meetings are set and both deal memos have been negotiated i just have to decide if i want to take a risk or be safe and who knows…..).