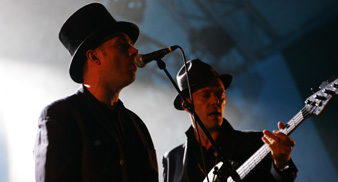 The Good The Bad And The Queen, the project led by The Clash‘s Paul Simonon and Damon Albarn, brought the Love Music Hate Racism carnival to a close tonight (April 27) with a unique collaboration with The Specials‘ Jerry Dammers.

This afternoon’s version of the song, orchestrated by Dammers, featured a number of MCs delivering anti-racist raps, including Syrian musician Eslam Jawaad, who also joined the band on “Three Changes”.

The rainy weather cleared to bright sunshine as soon as the group took the stage and launched into “Kingdom Of Doom”, which was restarted by Albarn after a few minutes due to continual piercing feedback.

Simonon performed with The Clash at the original Rock Against Racism gig, held in Victoria Park in 1978.

Earlier in the afternoon, the carnival saw a performance from an all-star group led by Babyshambles‘ Drew McConnell.

Joining the bassist for various songs were Sham 69‘s Jimmy Pursey, who sang on a rendition of The Clash‘s “White Riot”, Arctic Monkeys‘ former bassist Andy Nicholson, Babyshambles‘ Mik Whitnall and Reverend And The Makers‘ Jon McClure, who joined the group on a version of The La’s‘ “Son Of A Gun”.

Hard-Fi also performed a crowd-pleasing set just after 2pm, featuring their singles “Hard To Beat”, “Living For The Weekend” and “Suburban Knights”.

The Good The Bad And The Queen played: