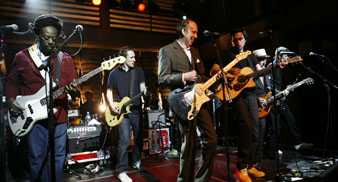 The two groups played onstage together at the end of the annual Jack Daniels Legendary Mash event, performing four tracks at the barn on Bar-B-Q Hill, near the famous JD distillery.

They started with Carbon/Silicon’s “Why Do Men Fight?'” and Hard-Fi’s “Stars Of CCTV” before playing two of the Clash legend’s 80’s classics.

The two bands performed Bad Audio Dynamite‘s 1986 single “E=MC2” before the racous finale of The Clash‘s chart-topping “Should I Stay Or Should I Go” – causing a mosh pit at the front of the 400-strong audience made up of competition winners and invited guests.

Speaking to Uncut prior to the show, Mick Jones exclaimed that he thought the show “would be amazing. Two drummers, two bassists, two guitarists and two singers. We’re just worried how we’re going to fit all of that on to the tiny stage. Especially the two drum kits!”

The two bands have previously ‘guest appeared’ onstage together performing “Should I Stay Or Should I Go” at this year’s NME Awards Show in February.

Jones used to produce Hard Fi singer Richard Archer’s former band Contempo, so the groups have a history. Hard-Fi often cover “E+MC2” at their own shows too.

BRMC, swathed in dense smoke effects onstage, performed tracks from both of their albums, as well as throwing in a surprise cover of Bob Dylan‘s Nashville-recorded track “Visions of Joanna”.

Check back to uncut.co.uk on Friday, when we will publish a full interview with Carbon/Silicon. The band are currently on a tour of the US, having the time of their lives – Mick Jones and Tony James’ stories of meeting over Creem magzine and their views on the future of music production are funny and thought-provoking.

For more information about Jack Daniel’s music events Click here for the jdset.co.uk