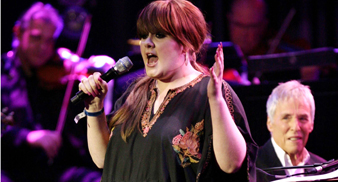 The composer and songwriter who’s had a 60 year career in music, crammed as much as possible into the 90 minute set at the Roundhouse, with much of the set played as medleys.

Bacharach played piano throughout, accompanied by the 50-strong BBC Concert Orchestra and his four touring singers, and even sang himself on songs like “Alfie” and “Raindrops Keep Falling On My Head.”

Jamie Callum was the first guest to join him on the Roundhouse stage, performing “Make It Easy On Yourself” before Beth Rowley sang “24 Hours From Tulsa.”

Star turn of the evening was Adele, who joined Burt onstage for a belting “Baby It’s You.” The singer who is currrently toppping the US iTunes chart after appearing on the episode of Saturday Night Live with Sarah Palin impersonator Tina Fey last week, got one of the biggest rounds of applause of the evening.

Bacharach, a sprightly showman, bantered with the audience throughout and constantly got up from behind the piano to applaud the musicians onstage.

Introducing the section made up of his film compositions, he joked about his prolific career, saying: “How many composers go from having songs recorded by the great artists, to film scoring and writing title songs for them, to even appearing in…” Adding after a pause, “Austin Powers 1, Austin Powers 2, Austin Powers 3. I can’t tell you what being in those movies has done for my career!”

As well as going through his very famous songbook, Bacharach also treated the intimate venue to a new instrumental piece “For The Children”, which was originally written for and recorded live with the Sydney Symphony Orchestra. It was the first time the string-laden piece had been played outside of Sydney.

The BBC Electric Proms Festival continues with shows including The Streets at the same venue tonight (October 23) and Keane at London’s Koko.

‘What The World Needs Now Is Love’
‘Don’t Make Me Over’
‘Walk On By’
‘This Guy’s In Love With You’
‘I Say A Little Prayer’
‘Trains & Boats & Planes’
‘Wishin & Hopin”
‘(There’s) Always Something There To Remind Me’
‘One Less Bell’
‘I’ll Never Fall In Love Again’
‘Only Love Can Break A Heart’
‘Do You Know The Way To San Jose’
‘Anyone Who Had A Heart’
‘Make It Easy On Yourself’
‘(They Long To Be) Close To You’
‘Twenty Four Hours From Tulsa’
‘For The Children’
‘Baby It’s You’
‘The Look Of Love’
‘Arthur’s Theme’
‘What’s New Pussycat?’
‘The World Is A Circle’
‘April Fools’
‘Raindrops Keep Fallin’ On My Head’
‘The Man Who Shot Liberty Valance’
‘Alfie’
‘A House Is Not A Home’
‘Any Day Now’
‘Magic Moments’
‘Story Of My Life’
‘The Blob’
‘Tower Of Strength’