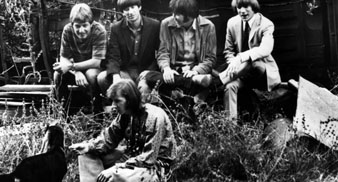 He died on January 31, of as yet unknown causes.

Martin – along with Neil Young and Stephen Stills, one of three Canadians in the Springfield – was born on September 30, 1940 as Walter Dwayne Midkiff in Chesterfield, Ontario. Leaving Canada, he’d found his way to Nashville, where he’d earned his stripes playing for Roy Orbison, Patsy Cline, the Everly Brothers and Faron Young. Moving to LA, he even fronted his own band, British Invasion-copyists Sir Walter Raleigh And The Coupons, in between stints with the Standells, the Modern Folk Quarter and The Dillards.

In Spring, 1966, he was invited to audition for the Springfield by Stephen Stills. Arguably a more accomplished musician than the others, he later grumbled to Young’s biographer Jimmy McDonough: “I didn’t have to audition for Orbison or Pasty.”

Young, speaking to McDonough, was clearly impressed with Martin: “We started tryin’ drummers. I liked Dewey. He’s a sensitive drummer. You get harder, he gets harder. You pull back, he pulls back. He can feel the music – you don’t have to tell him. Eye contact. Signals. All natural. To me, that’s worth its weight in gold.”

After the Springfield collapsed in 1968, Martin attempted to put together a second line up, the New Buffalo Springfield; later, New Buffalo after a legal dispute with Stills and Young. But Martin was eventually fired from the band, and went on to work first as a solo artist then in Medicine Ball until 1971, when he retired from music to become a mechanic.

But Martin, it seems, could never quite shake the Springfield. In the mid-Eighties, he reunited with bassist Bruce Palmer for Buffalo Springfield Revisited, and they toured the chicken-in-a-basket circuit through to the early Nineties. In fact, Martin and Palmer briefly reunited with Young in 1987, when Young was assembling a backing band for his This Note’s For You album, but the sessions didn’t work.

In 1997, the members of Buffalo Springfield (without Young) were inducted into the Rock ‘n’ Roll Hall Of Fame. On the song “Buffalo Springfield Again”, from his Silver & Gold album [2000], Young sang of how he’d “Like to see those guys again/And give it another shot.” With Palmer’s death in October 2004, and now Martin’s, that, sadly, will now never happen.