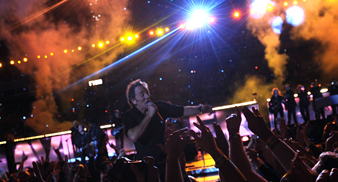 The four-song set kicked off with Springsteen yelling to the biggest audience of his career: “Ladies and gentlemen for the next 12 minutes we’re going to bring the righteous and mighty power of the E Street Band into your beautiful home. I want you to step back from the guacamole, I want you to put the chicken fingers down and turn your television all the way up!” before playing”Tenth Avenue Freezeout” from the 1975 classic album ‘Born To Run’, swiftly followed by the LP’s title track.

Springsteen & The E Street band also performed “Working On A Dream” – the first single from their new album, which debuted at number one in the UK albums chart the same day as the Superbowl.

Closing the halftime show with the track “Glory Days” accompanied by a huge pyrotechnic display, Springteen’s final shout out was a celebratory “I’m going to Disneyland!”

The honoured spot at the Superbowl is regarded the ultimate platform to perform on, with artists sales rocketing after the event.

He is also strongly rumoured to be one of this year’s Glastonbury Festival headliners in the UK.