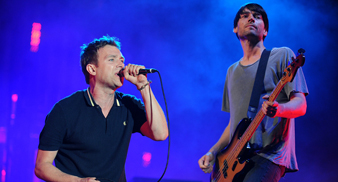 Joined by Phil Daniels resurrecting his part on single “Parklife” and brass musicians and backing singers, Blur ran through hits from their entire career, kicking off the Pyramid stage’s last show of the weekend with “She’s So High.”

Blur, who are due to play more ‘comeback’ shows in London’s Hyde Park on Thursday and Friday (July 2, 3), have previously played the Glastonbury festival as headliners in 1998 and on the NME stage in 1994 and 1992.

Frontman Damon Albarn said he was happy to return to Worthy Farm, declaring before playing “Popscene,”: “I’m pleased we decided to do these gigs now, this is the fourth time we’ve played here. It’s really, really fantastic!”

Michael Eavis, who organises the popular festival said that this year may have been the best ever, exclaiming: “I’ve always said this, but this really must be the best one [festival] ever, surely? Do you believe me? Having Neil Young, who I’ve been waiting for for 39 years, and Bruce Springsteen just appear out of the blue – and of course Blur tonight – we’ve got three major, major headliners.”