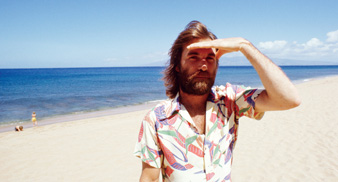 The double CD package features 12 bonus tracks from the recording sessions from the unfinished follow-up album Bambu, which were mixed with engineer John Hanlon.

The CD set will also include a booklet with previously ‘lost’ photos that have been uncovered in the Sony Music archives.

Although hugely popular at the time of release in the late seventies, Pacific Ocean Blue has been out of print since the early eighties and survived up until now only as a collector’s item.

Dennis Wilson once said, “Everything that I am or will ever be is in the music. If you want to know me just listen.” Now comes the chance to reacquaint with the eternal Beach Boy.