The legendary Leon Russell will be taking your questions 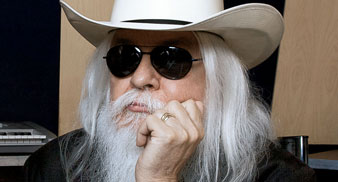 The great Leon Russell – legendary musician, songwriter, arranger and producer, and a 2011 Rock’N’Roll Hall Of Fame inductee – is in the hot seat for Uncut’s regular ‘Audience With’ feature.

As well as a string of masterful solo records, Leon has played alongside the very biggest names in music: Bob Dylan, The Rolling Stones, Elton John, The Byrds, The Beach Boys, John, George and Ringo, Willie Nelson, Marvin Gaye, Phil Spector, Frank Sinatra. That’s one hell of a CV.

“What was it like playing at the Concert For Bangladesh?”

“How does he feel about his songs being covered by artists as diverse as Ray Charles, Joe Cocker, Sonic Youth and Christina Aguilera?”

“Where does he buy his awesome hats?”

It’s up to you what to ask him, so email your questions to uncutaudiencewith@ipcmedia.com by Tuesday, May 24.

The best questions, and Leon’s answers will be published in a future issue Uncut magazine. Please include your name and location with your question!