All Aboard The Captain Sensible

Damned man has locomotive named after him! Choo Choo! 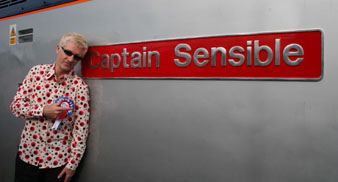 Captain Sensible, who founded punk group The Damned in 1976, has had a locomotive named after himself.

The train is a Cotswold Rail Class 47, and will serve the Gloucester to Brighton route.

The MD of the company, Adrien Parcel has always been a huge fan of The Damned and Sensible, it turns out is a bit of a train enthusiast – so when the loco was repainted late last year, it was decided that the train be named in honour of the singer.

Sensible attended the loco’s maiden voyage on February 10, with his current band Dr Spacetoad Experience and a legion of fans who had paid up to £40 for first class tickets.

In celebration of the honour, te band played a gig onboard at Hove station in the afternoon and then performed a second show at the Hobgoblin pub in Brighton the same evening.

More musical tribute locos are being planned for the near future.