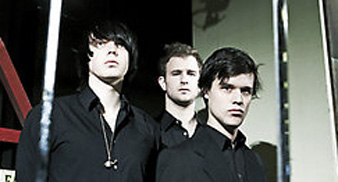 Eurosonic Nooderslag: The European Music Conference and Showcase Festival – sounds like a bit of a mouthful, but what it actually entails is a SXSW or Camden Crawl-style couple of days, with more than 250 artists (encompassing 34 nationalities) playing on over 30 stages in the university town of Groningen in Holland, all showcasing their live acts and in many cases new material to 18,000 punters.

With White Lies crashing in at No.1 in the UK album’s chart with their debut LP To Lose My Life just four days after their performance on Eurosonic’s first night (January 15), it’s easy to see the calibre of artists picked to fly the flag for the British music scene.

Dominated by angular guitar songs with huge choruses, the band’s 45-minute set was a clear indication that they have the skills to fill much bigger venues, singles “Death” and album title track “To Lose My Life” particularly standing out. You can check out clips from White Lies’ Huize Maas show and see a brief interview with the band, by clicking HERE. WL head next to SXSW, Coachella, and a European headline tour in May; worth checking out.

On a similar vibe, The Rakes showcased their much anticipated third album release, Klang, which has already sent ripples around the Uncut office (see John Mulvey’s Wild Mercury Sound blog for a preview HERE).

Playing at one of the venues on the outskirts of the town, Simplon, The Rakes’ gig on Eurosonic’s second night (January 16) didn’t exude the fervour their now polished live shows can, though new album track “That’s The Reason” bolstered the lacklustre run through of past Top 40 singles “‘We Danced Together”, “22 Grand Job” and “Strasbourg.” Here’s hoping their forthcoming European tour sees them up the anti somewhat.

Other highlights of the two-day international music showcase included what could be best described as Iceland’s shiny new version of Sigur Ros , the aptly named For A Minor Reflection . The four-piece certainly conveyed a similar sense of isolation, with hauntingly desolate non-lyricised music, all bearing exceedingly long Icelandic titles.

Le Corps Mince De Francoise (which roughly translates as Francoise’s Thin Body) are three hotly-tipped Finnish lasses whose show on the second night had queues out of the door (a frustrating experience when, as was the case here, the festival had a one-in, one-out policy). Their shouty, swearword-ridden songs were quite harsh on the ear drums, but the audience seemed to dig them.

A Belgian pop group named after a (Lisa) Simpson’s doll, Malibu Stacey were energetic, sharp and had catchy lyrics too. They are not to be confused with former Terrovision bassist Leigh Marklew’s band of the same name. The Belgian six-piece have certainly got the pop songs to back up titles such as “I Was Spartacus.” Despite Eurosonic’s focus on Belgian acts this time around (every year a different country is picked), it was clearly the year for the newer British bands to shine.

Filthy Dukes, more used to playing packed-to-the-rafters sweatpits in Hoxton, found themselves bizarrely playing their fresh take on electro-pop to a near empty Simplon. For the few that were there, it was certainly dance-fun, but perhaps their star has already ascended too high for gig-bookers who use Eurosonic to seek out fresh blood. Filthy Dukes’ next big gig is manning the decks at the NME Awards aftershow in February.

For more information and round-ups from this year’s festival and to submit your bands for the 2010 event, see the official website here:www.Noorderslag.nl