Playing spot-the-reference isn’t, I guess, the most elevated game for critics to indulge in. White Denim’s music, however, suggests that the Austin quartet are conceivably America’s most exciting record store nerds. Last time they put an album out (“D”, in 2011), I wrote a review in the mag that included this paragraph: 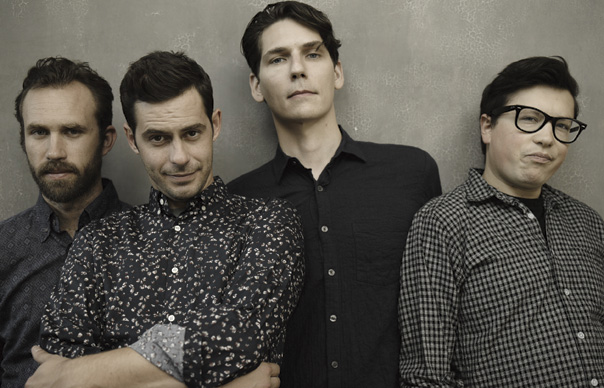 Playing spot-the-reference isn’t, I guess, the most elevated game for critics to indulge in. White Denim’s music, however, suggests that the Austin quartet are conceivably America’s most exciting record store nerds. Last time they put an album out (“D”, in 2011), I wrote a review in the mag that included this paragraph:

“In the second-hand record shops of Austin, Texas, one suspects White Denim may have a bit of a reputation. A couple of months ago, the band posted a mixtape, on www.gorillavsbear.net, that could be read as a memorial to their crate-digging. Who were the choogling brothers that appeared to be singing in Japanese? Was that Crazy Horse (without Neil, mind), nestling just before Moby Grape? And what of the mesmeric last piece, a systems extravaganza reminiscent of Steve Reich, but more cosmically inclined?”

I’ve just checked and the mixtape is still there (it was Moby Grape and Crazy Horse of course; the other artists I alluded to were Happy End and Roberto Cacciapaglia). As a primer for the eclectic and arcane roots of “D”, it remains both effective and enjoyable.

When White Denim leaked the first track from “Corsicana Lemonade” a few weeks ago, though, there was a small but perceptible rumble of discontent from some of their fans. The relative directness of “Pretty Green”, along with the news that Jeff Tweedy had produced at least some of the forthcoming album, “Corsicana Lemonade”, led a few to conclude that White Denim were at least trying to sell out, to “do a Black Keys”.

As Phil King in the Uncut office has pointed out, “Pretty Green” actually sounds more like a turbocharged version of this old Paul McCartney song, “Oh Woman Oh Why”…

If there’s an echo of The Black Keys that I can spot on “Corsicana Lemonade”, it’s a rather skewed one: the superb title track at least begins with a frisson of Afrobeat that reminds me of what Dan Auerbach brought to “Ice Age” on the Dr John album he produced, “Ice Age”. “Corsicana Lemonade” (the song), though, soon enough evolves into a meticulously-plotted jam that’s more reminiscent of an old White Denim touchstone, The Allman Brothers.

If there’s a change this time out, it’s perhaps that these jams don’t move into quite such transcendent spaces; in one piece I wrote about “D”, I talked a lot about how they were a kind of Southern Math-Rock, and about how their choogle could evolve into shamanic workouts that recalled the Boredoms, of all people.

Without losing that trademark intricacy, and their progressive imperative, “Corsicana Lemonade” feels like a fractionally streamlined, compacted version of White Denim. The mathematical extrapolations have been cut back, the Minutemen jerks smoothed over a little, but the gushing invention of their music is still intact. At heart, “New Blue Feeling” is an impeccably crafted country-soul ballad, but it’s the way that the band empathetically tug it into something more revved-up, wired and expansive that makes it so special.

I don’t have a mixtape to hand, like last time, with which I can parse the more obscure influences. There are some big name allusions here, though: a surfeit of Allmans (check out “Distant Relative Salute”, especially); Hendrix (“Limited By Stature” begins in a not entirely dissimilar way to “Burning Of The Midnight Lamp”); Ernie Isley (the blissfully fuzzed riffs that close “A Place To Start” and the album; the Thin Lizzy chops in “At Night In Dreams”.

“Come Back”, meanwhile, suggests that White Denim might find investigation of the Chris Robinson Brotherhood worthwhile, however unlikely that might read. It all feels like a band subtly tweaking their sound for a potentially bigger audience, without alienating the loyalists who’ve loved their terrific earlier records. I think White Denim are one of the finest American bands of the past few years, and I really hope this works out for them.