Up Close And Personal: Quentin Tarantino

Uncut speaks to the director about his new flick Deathproof 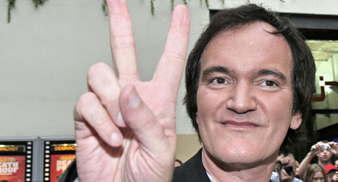 UNCUT: You love fusing genres, and with Death Proof it’s the slasher film and car chases…

QUENTIN TARANTINO: It’s exactly that. In this film the two genres are fused so much so that they switch hand at some point in the movie. I don’t even know exactly where that point is, but there is some point in the film, when you’re watching the last 20 minutes, you’re not watching what came before. You have actually switched genres and you’re into a different movie.

Death Proof is a deliberately silly title; where did it come from?

Sean Penn. I remember when I was buying a new car once and we were talking in a bar and he began telling me about how for like $20,000 you could take a car to a stunt specialist and they could reinforce it, and make it “death proof”. When he said that, “death proof”, it sounded so fuckin’ cool, and it stuck with me. It seemed like a good title for a film about a huge car chase.

What makes a good car chase?

When you become knowledgeable enough as a filmmaker to figure how stuff is done, you can start looking at stuff like chase scenes and dissect them, and see the qualities of this one versus the qualities of that one.
One of the things that I realised fairly quickly was that there are different types of chases. You have the chase where the hero is being chased, which is the case almost 80 per cent of the time. Then there’s 20 per cent of the time where the hero is doing the chasing. The funny thing about that is those are always the most dramatically engaging.

And you have both types of chase in Death Proof…

Yeah, we do kind of have both in our big chase. But the other thing that I noticed with car chases is that there are the chases that existed before [Mad Max director] George Miller and the ones that come after. There was a big difference between them and the ones that we did in America, because ours were always very location oriented. San Francisco was another character in the chase in Bullitt and same in the chase in Colors, it’s a big deal where it takes place, raging through Watts. But then Mad Max came out and it wasn’t about location at all. Everything looked like the fuckin’ Outback. So the experience was all about being in the chase, and nothing else. It’s all about that you are in the chase for the entire time that the chase is going on. And that’s where my chase is.

Why are all the best movie car chases from the ’70s?

It’s funny you should say that. We watched so many car chases, car chases done now, in the ’90s, the ’80s, and in the ’70s. And the ones done in the ’70s just always killed. They just always were better. And there was a reason: because they fucking did the stunts.

So you did all your stunts?

My whole mantra on Death Proof was, as far as my action was concerned, no CGI, and no under-fuckin’-cranking. The stunts we shot! Man, we shot down the 101 for seven minutes, which was brilliant. I mean we’ve done some crazy stuff on this film that’s actually never been
done before.

You must have been very disappointed when Grindhouse was split up…
Oh, it was disappointing. The few people who saw it loved it and applauded, but maybe a lot of people just didn’t want to see two movies. I don’t think you can underestimate the fact that people can’t always stomach a three-hour movie on a Friday night. They’ll want to have dinner, drinks and a movie, and if you fuck with that that, they ain’t happy.

So just how different is the new Death Proof from the Grindhouse version?

There’s a difference of about 25 minutes, but you’ve got to think that I made Death Proof, Robert [Rodriguez] made Planet Terror and we both made Grindhouse. So I wrote a full script for Death Proof and was then like a brutish American exploitation distributor who cut the movie down almost to the point of incoherence. I cut it down to the bone and took all the fat off it to see if it could still exist, and it worked. It works great as a double feature, but I’m just as excited, if not more excited, about actually having the world see Death Proof unfiltered.

Is Planet Terror much longer, and will it get a release?

Planet Terror, I think, had an extra 11 minutes and it’ll definitely get theatrical release. It’s playing at some festivals over the summer; it’s just coming after my film, while in Grindhouse it came before it!