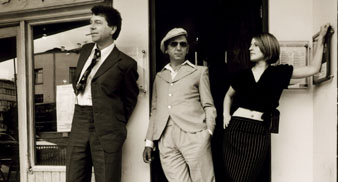 KEVIN ROWLAND: When I look back, yeah maybe I have underestimated my contribution to Too Rye Ay. I’ve oscillated through different periods, from thinking that everything was mine to the opposite. Undoubtedly Kevin Archer had a contribution to it. I was influenced more than I should have been by his band, Blue Ox Babes. Not the songs, but the style. Kevin played me some demos and I had heard the fiddle player and said ‘She’s good” and he said yeah, she’d be great for you. So I went out and found Helen. So I was influenced, but there’s not one note, not one melody, not one lyric, not one chord sequence of his music on there.

PAUL SPEARE (Dexys sax player, 1980-82): From my point of view, the whole recording of Too Rye Ay was overshadowed by the tensions within the band. Jim Paterson and Brian Maurice had already gone and been brought back, so there was a very strange feeling about that. So it was good to have producers there – Clive Langer and Alan Winstanley – who would take charge of the recording, were not prepared to be too swayed by Kevin’s ideas. And consequently it was very successful.

ROWLAND: It wasn’t a great atmosphere in the studio, which is why the record to me is a disappointment. One of the reasons. I think the songs are good. I think the production definitely let down the songs, yeah. And I think my performance wasn’t great. How much of that is down to the production is hard to say, and how much down to the fact that half the band had left… There wasn’t that unity that we had in 80 or 81. It wasn’t like one for all and all for one. Or anything like it.

CLIVE LANGER (producer): Did we have much input? Not really. Maybe on “The Celtic Soul Brothers”. But they had rehearsed like an army. It was done very quickly – three weeks. Most of it live, and then patching it up. It wasn’t a creative production job as far as co-writing or whatever. I felt a bit guilty when “Come on Eileen” was number one around the world, because I didn’t do that much. They had it sorted out. The only thing that justified it for me at the time was that we had things like “Our House” out with Madness. I just remember doing a lot of work on that. Sometimes you do more work than you’re credited for, and other times, if a track sounds great you let it go… But you still get the same percentage!

ROWLAND: It did give me confidence when I wrote “Come on Eileen”. But you know, when you write something you get confidence momentarily. Clive didn’t think it would be a hit! He told me that! He said it wasn’t as good as “Celtic Soul Brothers”. And my manager didn’t think it would be a hit. He said he thought it was trying too hard. The record company wanted to release “Jackie Wilson”. But in the studio we got some things right, and we got that right.

CLIVER LANGER: Do you know the story about that “Come On Eileen”? We recorded it as “James, Van and Me” – James Brown, Van Morrison, and Kevin. That was the original chorus, singing about people who influenced him to write the song – like he mentions Johnny Ray. And then he came in one day and said I want to change the lyric completely, it’s a working lyric. And we actually liked “James, Van and Me”! Because we’d been working with it and got used to it.

SPEARE: I don’t suppose any of us realised quite how big it was going to become. But I do remember when we first did a couple of gigs with that material and the violins, in Newcastle, and the reaction was… surprising. Just how good it was. Especially “Eileen”. I think we did start to feel, perhaps even during the recording that “Eileen” did have something special.

ROWLAND: I did feel a bit freaked out by success. There was a lot of things in the press at the time, which I took very seriously, just saying things like “oh, Van Morrison rip-off”. They weren’t saying I was influenced by Van. They were saying it was a rip off. But I made that clear, I spoke about that. I covered one of his songs for god’s sake! I remember reading a review of “Eileen”, and it said the cover was a rip off. That it was “reminscent of St Dominics Preview”. But it wasn’t actually – it was actually inspired by the cover of the Freewheelin’ Bob Dylan! But I did feel somewhat guilty about the Kevin Archer thing. But I would feel weird and guilty about having any success. I felt guilty with the first album. I always felt awkward about stuff.

SPEARE: It annoys me when I hear “Eileen”. I don’t really frequent places where it would be played. Sometimes I get caught out. The main thing, is if I’m anywhere and it comes on, we don’t talk about it. 25 years of living with that song…

LANGER: Of course I’m proud. It’s great when you hear a record that you were involved in. Especially that woman, the astronaut who was in the news last year, who drove across the country, her name was Eileen! They were playing “Come on Eileen” on NBC news!