Golden Globe winner for The Wrestler talks to Uncut! 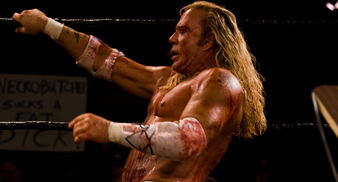 UNCUT: How are you, Mickey?

ROURKE: My legs are fucked up because Darren [Aronofsky, director] ruined them again. Constant pain. Old football injuries blew up: for the wrestling I had to put on 36 pounds and my knees weren’t used to carrying the extra weight. The only way I would do this movie was if I could give all of myself to it. I wanted to respect the sport and show these guys with as much as honour as possible and win their approval. The hindrance was I got three MRI’s in the first few weeks. My knee buckled, my neck went out with whiplash, had a swollen disc…I f your back’s messed up, the strongest of anybody can’t do anything. I couldn’t lace my shoes, or get off the ground.

I called my agent and said look don’t tell Darren this and I’m not faking but I’m half-paralysed here. I don’t trust doctors, but eventually the stunt co-ordinator took me to the guy who works with all the top cage fighters. I thought: yeah right. Two days and I was better. I wish I’d seen him sooner, because for a month there’s Darren yelling at me, “You’re only giving me 50%! You look like a goddam boxer!”

So you used your boxing experience here?

I had to let it go. See, at first I had no respect for wrestling. I looked down on it as a sport just morons went to. Like WWF, what the fuck is that, y’know? And I’d trained for fifteen years as a boxer to throw punches you didn’t see coming. It was hard to break that and throw punches from, like, back here. It felt ridiculous. I’d wanted to work with Aronofsky, but not like this. But after a while something happened. I started to have fun with it. I’d see these guys do moves and go: Fuck, I wanna do that. Even though I don’t have the greatest equilibrium! I’d tape my wrists hard – I’ve broken them more times than I can count – and shoot them up with Novocaine, which you’re not supposed to do before a fight. I’d land in some pretty ugly positions in practice. And I know me: if I get it first time, great, otherwise it’ll get worse not better. But when we shot that scene in front of 3,000 in between real matches, I fucking nailed the toughest move. I was more proud of that than any acting moment in the whole movie.

Did you base Randy “The Ram” on a real character?

Back when I was a kid I’d go watch boxing while other guys went to the wrestling and I’d think: fucking idiots. But my brother knew this one silly guy. He was a biker with long blond hair and blown-out knees from falling off motorcycles. I’d be talking to him and he wouldn’t look at me and my brother would go, “Bro, he ain’t got his two fucking hearing aids in.” We’d shout at him, “Magic! Magic!” Magic had no money at all, wrestled occasionally, fixed bikes on the side. He had one sweatshirt, one pair of jeans, and red and white cowboy boots. He lived in an old school bus behind the gym. I wanted that in, but Darren wanted the trailer park thing.

You wrote some of your own lines though?

Yeah I didn’t really care for the screenplay. It was mediocre. But I also realised this director had the ability to transcend the material. I’d done my homework and he reminded me of when I met the young Francis Coppola. He’s smart, uncompromising and innovative. He said to me, “You’ll listen to everything I say, you’ll do everything I tell you, you won’t disrespect me. And I can’t pay you yet.” I thought: wow, he’s got some balls. But yes, he allowed me to rewrite my heavy shit scenes with Evan Rachel Wood and the big speech at the end. So the stuff that comes out of my mouth is very personal, stuff I’ve been through. That’s me in there. I was thinking: well, nobody will realise I’m talking about myself. I guess people are smarter than you expect sometimes.

So you and Randy are both faded stars, attempting comebacks..?

It’s about loneliness. I existed in loneliness for many years. When you have a career and self-destruct and ruin it, people don’t rush to put you back to work. And I wasn’t a little bit bad – I was fucking horrible. For fifteen or sixteen years. I was out of line, out of control, out of my mind. I had to lose my house, my wife, my money, everything. I was reduced to selling off my motorcycle collection for cash: where I come from, you’re not supposed to sell your motorcycle. Sly Stallone gave me a part in the Get Carter remake and saved me. I found out he paid my fee out of his own pocket, though he tried to keep that secret from me. Though really it was my therapist who saved me. From myself. See, success upset me because people kissed my ass. I’d washed dishes, worked security for gamblers and whorehouses and transvestite bars – where had they been then? And when I was abused as a kid? So I was mad with rage; I needed to gain the knowledge to fix what was broken. There will always be that little Mad Hatter inside me with his axe. But now I understand there are consequences to actions. There’s still work to do.

Can you appreciate the affection and acclaim you’re getting now?

I’m thankful but wary. Of course I have regrets that I had to fall so far from grace to change. I was ashamed and hopeless, but it feels new now. It’s almost like I never had that other career before.

How did you get Springsteen involved?

I wrote Bruce a letter, because we’ve known each other over twenty years, and he knows what I used to be, or whatever. Where I went. What I’d been reduced to. I told him how I felt lucky now and didn’t have to end up being this guy, being Randy. A while later I got a call in the middle of the night: he said he’d written a little song, for nothing. It’s fucking beautiful, right? I was honoured he took the time, because he’s a busy cat. I mean, I’m so goddam proud of this magical movie and to have Bruce’s input…ain’t nobody in Hollywood with all their millions can just ring the man and he’ll do a song, y’know? And Axl and the guys let me use “Sweet Child O‘ Mine“ for nothing too: we couldn‘t afford it on our budget. These guys stepped up to the plate.