UNCUT Q and A: Devendra Banhart

The acid-folk king says: Perhaps I'm a springy pubic hair on the body of Bert Jansch... 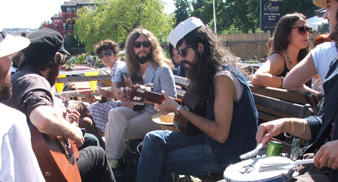 UP CLOSE AND PERSONAL: DEVENDRA BANHART

UNCUT: You recorded in Topanga Canyon. How did the surroundings influence the record?

DEVENDRA BANHART: Every time I’m in a new place I have a whole new set of influences and inspirations, so it always comes out differently. The themes of life are always changing. The sun and the moon – they look the same all the time, but they’re always changing, and they’re not going to be there forever. So here, I think we just had to honour each moment. (Breaks off) Oh, a beautiful hawk just flew right by, like a spotted Eagle or something…We’re all still out here in Topanga Canyon, California.

What’s so special about that place?

You look out the window and it looks like the mountains of Peru. LA is a great city, it gets better every year. Here, you’re a couple of miles outside of the city, and the air is clean, the desert is clean. I mean, one thing is its history, it’s completely magical – it’s like you’re home, like you finally reached the place you need to be: it’s because of the cacti, because of the fire that’s underneath all the brush…it’s powerful, it’s like a vortex. Just across the mountain over there, you can see where Neil Young used to live. He’s not there any more, but we can still hear him.

How did the sessions for the album proceed?

We spent a long time looking around for a good spot: in LA in Laurel Canyon, in Malibu. We were in Venice before, and needed a little more space and a little more sky and light so we came up here. We were listening to Alice Coltrane, and she always has the answers – and eventually we came to this place. It’s all wood, the windows go all around the house.

There are mountains, and lizards, and bunnies that you can feed. They really like chocolate chip cookies. There are coyotes in the night time that sing through the valley. If you were here, you’d live here. It’s an awesome, undeniable place – so it just worked.

What does it take for you to turn that into a working space?

We got together a couple of the new songs, and had a bunch of sketches, and were going to go and play in Mexico. So we got the group together: we have Lucky Remington on the bass, Noah Georgeson on guitar, Andy Cabic on guitar, Greg Rogave from Priestbird, the drummer. Pete Newsom was on keyboards. And we were here just trying to work stuff out for the show, so we just decided to dive in and make a record. We were in this beautiful room, set up all the instruments, and watched Roadhouse II while we practiced. It was perfect.

It’s a big record, and a long one. How fast did things move on it?

We moved in at the beginning of the year, January or February. We recorded like five records, but we had to pare it down to one. When it’s your home, and you’re making food with these people, and sleeping next to them, the songs are in everyone’s spirit. And so, we were very productive, it was amazing. I wish there was a format for five records, but nobody buys five records at a time. It’s hard to do, to pare it down: these songs are your children, you don’t want to just abandon them on the street.

It sounds, at times, like a break-up record. Can you elaborate a little on that?

Well, love is a difficult thing to hold on to. It’s a slippery little beast. It will hold you and then it will elude you at any moment. It’s something that we all see. It’s about listening to how it goes, and then putting it in the songs. I don’t think it’s a new thing: I think everyone knows heartbreak from the day they’re born in whatever form they’re living. It’s always changing. I don’t ever think of myself as a dark person or a ruined person in any way. I just feel happy to be alive, and to be able to love.

It’s not always the most sunny day, or the most sunny experience, there’s thunder too. But that’s just how we all ride through life. It’s hard not to have the things in your life leave an indelible mark on your perspective, your vision and your dreams, although I try to be very careful about my inner space all the time. With the songs, it’s not always me, it could be me writing through somebody. But it’s impossible for it not to be a personal journey.

The album is stylistically varied. How do you manage to incorporate these influences and not have it come over as pastiche?

My background, being born in Texas and then growing up in Caracas…I’ve been exposed to country music, then Salsa, Cumbia, Merengue, Samba, Bossa Nova. My father, who was a traveling yogi, – but also was a follower of Premrawat, who named me – he discovered the Qwaali music, and African blues of Ali Farka Toure. And he also liked Neil Young. I was from an early age being exposed to that music, so I never really felt an alliance to one particular style, or set out premeditatively to play one style of music when at home I’m listening to ragas and reggae and bluegrass, you know? I’m very lucky my parents were into different kinds of music.

Musically, you’ve built some interesting bridges between musicians from the 1960s to the present day. How does a continuum like that come about?

If there was a place for me in the realm of such great artists, I would be honoured – that would be like the ultimate dream, like with Vashti Bunyan and Bert Jansch. If we’re going to look at a continuum as one thing being part of another, then let’s talk about a human body: perhaps I’m a springy pubic hair, maybe a little bit of plaque on the body of Bunyan and Jansch.