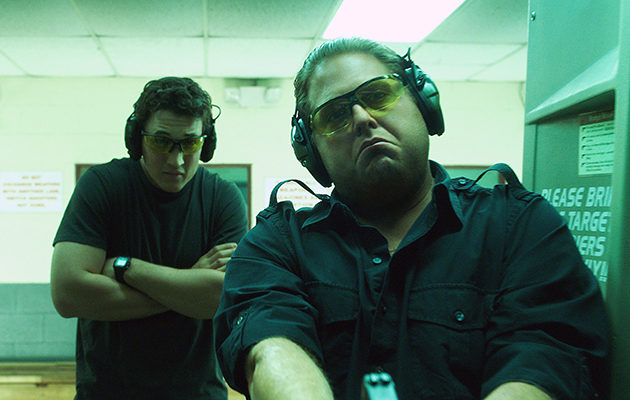 The film opens with a flashback: a body in a car boot, an act of violence, a voiceover. Events revolve around an unreliable protagonist of questionable moral fibre while his partner-in-crime is unpredictable, prone to sudden profane outbursts; there is another figure, a ruthless, inscrutable older man. But which film is this? You could be forgiven that War Dogs was the latest film from Martin Scorsese – so heavily does it borrow from the director’s box of tricks – rather than Todd Phillips, the guy who brought you The Hangover films.

As in those films, there is bromance and there is chaos; a scattershot black comedy of excess and adrenalized peril. It follows the true-life exploits of David Packouz (Miles Teller) and Efraim Diveroli (Jonah Hill), schoolfriends who made a fortune as arms dealers in the last days of the Iraq and Afghanistan Wars. They began buying weapons at police auctions and sold them on the internet – a military site Diveroli describes as “eBay, but for war” – before finding themselves on top of a huge deal to sell outdated Chinese ammunition to the Pentagon.

Phillips film riffs on any number of Scorsese films. Hill’s Diveroli is a version of Donny Azoff, his character in The Wolf Of Wall Street, who was essentially a cuddlier Joe Pesci. The show-and-tell business of how the arms business works from the top down – told in voiceover by Packouz – replays Scorsese’s introduction to the day-to-day operations of the Tangiers in Casino. More generally, the voicovers, flashbacks, jump cuts, music cues are familiar from many Scorsese films; the presence of Bradley Cooper, as a corrupting figure, aims for a De Niro-esque cameo.

Another reference here is Adam McKay’s The Big Short – which similarly focused on characters making cash from crisis. Although McKay’s film was about hedge fund managers, Phillips’ guys are arms dealers: what’s the difference? While The Big Short largely took place in offices and financial institutions, War Dogs at least gets out a bit. Packouz and Diveroli find themselves heading into Iraq for some bantz on the road to Fallujah. There is some crude ethnic stereotyping. On learning they are in a region called “the triangle of death”, Diveroli laughs, “We drive through all triangles. Including your mum’s.” It is danger played for LOLZ.

Phillips is so focused on the double act between Teller (subdued, bland) and Hill (maniac, dirty) that he literally forgets to bother with any other characters. Packouz’ wife, played by Ana de Armas, exists solely as a narrative point, as a reminder of the ‘normal’ life he is slowly disappearing from. What does she do, apart from worry about him and raise their child? Cooper’s arms dealer fares better, with a couple of meaty scenes where he is required to be shadowy and threatening. He vaguely recalls Will Ferrell’s cameo at the end of Wedding Crashers, as Chazz Reinhold, a legendary retired crasher who now lives at home with his overbearing mother.

Everything else is turned up to 11. Phillips seems to be aiming for maximum impact. A massive Scarface mural hangs on the wall in Diveroli’s office. Yes! We get it!