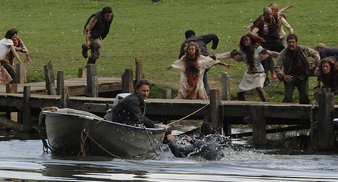 The sequel to 2002’s viral-nightmare horror 28 Days Later is directed by Juan Carlos Fresnadillo, a Spanish filmmaker with one credit to his name (though an extremely good one, the destiny-themed thriller Intacto) who Boyle hand-picked as his replacement. “Danny’s line has always been that to have a successful business in this country, you need to embrace sequels,” says Macdonald.

Although none of the original cast return; the blood-hopping virus that spawns acute anger management issues does. “I tried to persuade [28 Days Later star] Cillian Murphy to come back as an Infected, but he wouldn’t,” Macdonald laughs, adding that Boyle never ruled himself out of directing “but it was just never going to happen because he was making Sunshine.”

“They were trying to bring fresh eyes to this landscape,” says Fresnadillo. “Danny said, ‘We need you because we love Intacto and we want somebody to introduce something new in the story.'” As it was, Fresnadillo was initially reluctant to take on the project, being neither interested in sequels nor horror movies. But when he had the idea to tell the story through the experiences of one family, he was hooked.

The film picks up with the US military overseeing Britain’s resettlement after the virus has burned itself out. Don (Robert Carlyle), who survived the initial outbreak, and his young son (Mackintosh Muggleton) and daughter (Imogen Poots), who were safely abroad, are reunited in a safe zone on the Isle Of Dogs. The question is, what happened to mum?
“That’s something I really loved about the story,” says Fresnadillo. “There’s a similarity between a virus and a human being. A virus is trying always to survive and human beings also have an amazing survival instinct.

In Don’s case, his survival instinct wins over love.” With a further twist that some people may be immune to the virus (albeit carriers), and a twitchy US military prepared to incinerate anything that moves when the infection returns, this, in every way, is aiming to be bigger and better than its predecessor. So prepare for Apache gunships strafing Westminster and nighttime panic in the streets of London.

Says Macdonald, “This is more action horror, in the same way that Aliens was to Alien. In the first film, you didn’t know what was going to happen; in this film, you sort of know. When the infection comes back, you see it build and break out. There are some big scenes of terror and horror…”

Click here to view the film trailer for 28 Weeks Later