“Thank you, Boston,” deadpans Thurston Moore as the audience at tonight’s gig show their appreciation for “Speak To The Wild”. Of course, we’re in east London – Dalston to be precise, at Café Oto, which has become a regular hang out for Moore since he moved up the road to Stoke Newington. 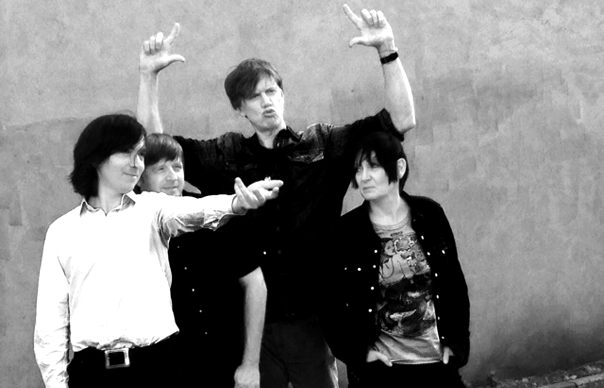 “Thank you, Boston,” deadpans Thurston Moore as the audience at tonight’s gig show their appreciation for “Speak To The Wild”. Of course, we’re in east London – Dalston to be precise, at Café Oto, which has become a regular hang out for Moore since he moved up the road to Stoke Newington.

Indeed, most recently, he enjoyed a two-night residency in this venue earlier in the month. Tonight’s gig, though, is pretty special. It transpires that Moore’s former Sonic Youth band mate Steve Shelley flew into town on Tuesday night. Moore brought him down to Café Oto, and finding there was nothing booked for this evening, they decided to put on an impromptu gig. It is, essentially, a pop-up gig in a part of town renowned for its pop-up shops, bars and restaurants.

The purpose of this evening’s show is to give the first live airing to songs from The Best Day, the debut album from The Thurston Moore Band. Aside from Moore and, on drums, Shelley, this marvellous new venture also includes Debbie Googe from My Bloody Valentine on bass and Nøught’s James Sedwards on guitar. Pretty much as you’d imagine, they don’t disappoint. Though, at first, you may be forgiven for thinking otherwise. Minutes before they’re due to go on stage, Moore can be found chatting amiably on the street outside the venue; inside, Googe ambles on stage and fiddles with her bass, Sedwards saunters on. There is some further fiddling of instruments, then Moore appears at a lectern and starts strumming; Sedwards joins in. All of a sudden, Shelley walks on, sits down behind his kit and the band hit the motorik groove of “Forevermore” at full tilt. It’s a bracing, powerful opener.

If anything, tonight’s set (six songs; though there are two identical performances divided by an interval) gives us a great opportunity to see these exceptional performers up close. Googe and Shelley, particularly, are a formidable rhythm section. Shelley has a smile on his face throughout the gig, like he keeps on remembering the punchline to a joke. His playing is fluid and consistently powerful. By comparison, Googe is an inscrutable presence. She faces away from the audience, mostly locked into a groove with Shelley. Her bass playing is extraordinary: the sound is thick and low, she doesn’t dwell on the notes, and on occasion what she’s doing more closely resembles riffing. You might think that Sedwards – arguably the least known member of the band – is here in a support capacity to back-up for Moore, but as his intuitive, digressive soloing on “Ono Soul” demonstrates, he is clearly capable of carrying his own weight among such storied company.

For his part, Moore is very much in charge of proceedings. His band mates regularly watch him, looking for cues, as he free jams through the free jamming of “Speak To The Wild” and the punkish “Germs Burn”. What is perhaps strangest of all is hearing Moore make reference to Hackney Empire or local anarchist groups from the 1970s. Indeed, one song on The Best Day, “Grace Lake”, takes its title from the literary pseudonym used by poet and Stokey radical, Anna Mendelssohn. Moore dedicates “Detonation” to the “Stoke Newington Eight”, members of urban guerilla group The Angry Brigade. The song was originally released on the Blank Tapes label by another N16 resident, David Blanco. “This is about Stoke Newington, but through a Yankee lens,” smiles Moore as he explains the song’s origins. Spotting Moore strolling down Church Street is, admittedly, still a strange experience.

The set ends with “Ono Soul”, and an obliterating noise fest not a million miles away from the ‘holocaust section’ of the Valentine’s “You Made Me Realise”. There is a 30-minute interval before the band return – Moore and Shelley have changed shirts for the second set – and do the whole thing again. The Thurston Moore Band are, by my reckoning, his third endeavour since Sonic Youth, after Chelsea Light Moving and Twilight. But of course Moore has been involved in many projects, often running several concurrently. Quite how long this one will endure remains to be seen, of course; but it’s easily among the best of Moore’s recent work. The album – which is due out in October – is excellent, and these live versions are muscular and digressive. Great songs, and a sense that Moore has found fresh inspiration in N16 with his latest, formidable accomplices.

You can find tour dates for The Thurston Moore Band here. The Best Day is released by Matador on October 21