We find ourselves in the wrong bar by mistake. Arriving at Hyde Park for this second London show on the Stones' 50 & Counting tour, we're issued with numerous coloured plastic wristbands that are intended to identify where we can travel around the site. There is this bar, that tier, this restaurant, these toilets... one of the first questions we're asked as we enter the site is whether we have a dinner reservation. 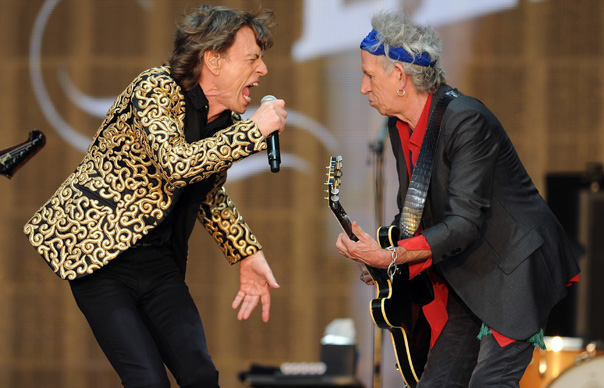 We find ourselves in the wrong bar by mistake. Arriving at Hyde Park for this second London show on the Stones’ 50 & Counting tour, we’re issued with numerous coloured plastic wristbands that are intended to identify where we can travel around the site. There is this bar, that tier, this restaurant, these toilets… one of the first questions we’re asked as we enter the site is whether we have a dinner reservation.

It seems that Hyde Park has been demarcated into various heavily corporatised areas in much the same way I imagine the Ottoman Empire was partitioned after World War 1. Which is how we’ve found ourselves in this nice little bar, ushered in here by a kindly steward who seems to have misread one of the wristbands strapped to our wrist.

The bar itself is peaceful, shaded from the sun by a marquee and modestly decorated with plastic chairs and tables. There are no more than 20 people here. The beer is free – if a little flat – and on tables dotted throughout the marquee there are glass bowls full of coloured lollipops and extremely good fudge. We suspect something is a little rum when Mick Taylor pads through in a dark suit and scarf saying the odd hello as he passes; then bassist Darryl Jones, in dark shirt and bandana, stops by at the bar to share a laugh with some folks he clearly knows very well. It transpires that we’re in the Rolling Stones’ own bar, reserved for the band’s family and close friends – an area we discretely leave (after one more drink, of course) and head out for what Mick Jagger informs us later from the stage is “the last show of the tour”: the end of the Rolling Stones’ 50 & Counting manoeuvers.

The Rolling Stones take the stage on the dot of 8.30pm, their arrival heralded by news footage from the band’s original 1969 free Hyde Park concert spooling across giant screens that are wrapped around the stage. A burst of heavy percussion blasts from the speakers – perhaps a nod to Ginger Johnson’s African Drummers who enlivened “Sympathy For The Devil” at the Stones’ 1969 show – before fireworks and… here they are, the Rolling Stones, Keith in that extraordinary simian crouch playing the opening riff of “Start Me Up”. We’re off. “It’s a hot time in the old town tonight,” Keith says later and, yes, it certainly is.

They follow “Start Me Up” with “It’s Only Rock ‘n’ Roll (But I Like It)”, accompanied by black and white images of Bob Dylan, Leadbelly, John Lee Hooker and James Brown on the giant screens. I’m not sure whether Mick fluffs the intro to tonight’s sashaying version of “Tumbling Dice”, but he seems to be caught in the middle of one of his “How’s everyone doing?” moments when the rest of the band start playing. The set so far is identical to last week‘s Hyde Park show, but while then they followed “Tumbling Dice” with “All Down The Line”, tonight we get “Emotional Rescue”, surprisingly only the first time the band have ever played it live in Europe. “Don’t you love this set here?” says Jagger, gesturing at the Oz-like forest of giant trees that frame the stage, their plastic branches intertwining over the heads of the band. “It’s like a tree house for Boris Johnson to live in.”

Then it’s into “Street Fighting Man”, a song whose counter cultural thrill isn’t dampened despite the event’s byzantine levels of corporate tiers, luxury restaurants, sponsored bars and credit card branding. It builds to a fantastic and protracted climax, swiftly followed by an energetic “Doom And Gloom” – arguably the band’s best single since “Start Me Up” – and then a tremendous 1966 vintage double whammy of “Ruby Tuesday” and “Paint It, Black”. The Stones really are on peerless, unstoppable form now. It’s striking how much difference there is between “Ruby Tuesday” and “Paint It, Black” – the former described by Jagger as “something romantic”, and which comes with some lovely, empathic acoustic guitar playing from Keith and Ron. Meanwhile, “Paint It, Black” is thrilling and nihilistic – eternally connected to the band’s darker, lysergic impulses – driven by Charlie Watts’ pummelling beat and a powerful, hypnotic guitar attack from Keith and Ron.

For a swaggering “Honky Tonk Women” – which made its debut in this park 44 years ago – Mick pulls out a Mr Fish style smock (“I found this out the back”), much as he did last week. The band intros follow, with Charlie – “the Wembley Whammer” – coaxed down from his drum kit by Jagger to address the crowd. He manages a brief “’ello” – “He speaks!” laughs Mick – which draws one of the loudest cheers of the night. Then Keith takes over vocal duties for a dusty “You Got The Silver” and an avuncular “Happy” – accompanied by some terrific pedal steel guitar from Ron. Then there’s a bouncy “Miss You”, before Jagger introduces Mick Taylor for “Midnight Rambler”.

The gradual reintroduction of Mick Taylor into the Stones – a process that began when he was invited in 2010 to contribute to the Exile On Main Street deluxe reissue – seems to have invigorated the band. On the strength of his slot tonight, it’s a shame he’s not on stage for longer: of the nineteen songs the band play, Taylor appeared on six of the studio versions. It’s interesting watching his interactions with the the rest of the group – at first he’s bunched together with Keith and Ron, the three of them locked in a complex groove of solos and riffs, then he moves out to meet Jagger – he’s the only musician to enter the singer’s personal space all night – and he and Jagger do a kind of call-and-response, with Jagger on harmonica and Taylor on guitar. Incidentally, Jagger is a terrific harmonica player – it’s a shame he doesn’t get to play the Jew’s harp tonight, another instrument he excels at. But as the two Micks duel on and on, and the song shudders and dies, only to be brought back to life by Charlie’s crisp, precise drums, I’m reminded of the brilliant footage in Crossfire Hurricane of the Stones playing “Midnight Rambler” at Madison Square Garden on the 1972 STP tour, and it seems like with Taylor on board they’re reaching back and channeling that same level of energy and danger.

The main set draws to a thundering close with “Gimme Shelter”, “Jumping Jack Flash”, “Sympathy For The Devil” – sampled conga introduction aside – and “Brown Sugar”. Since Ron got the first solo of the night way back on “Start Me Up”, I’ve kept a tally of guitar solos. During the first half of the set, Ron had a healthy lead on Keith by four to one, but since the sun went down, Keith – ha, ha – seems to have stirred into life, and his solos on the last four songs here are dirty and glorious – in particular his bristling solo on “Sympathy For The Devil”. The encore, then, is a lovely “You Can’t Always Get What You Want” and “Satisfaction” before the final bows, with Mick Taylor in the middle – symbolically, at least, back in the very heart of the Stones. The last thing we see up there on the giant screens is Keith putting his arm round Charlie as they walk off stage into the wings, swallowed up by the blackness.