The Replacements are back! Uncut rejoices!

The world and nearly everyone in it has been reduced to trembling excitement by the return of David Bowie, but for some of us there is another recent resurrection perhaps even more miraculous and just as unexpected, a comeback by The Replacements, who today release online the Songs For Slim EP, their first new recordings in more than 20 years. 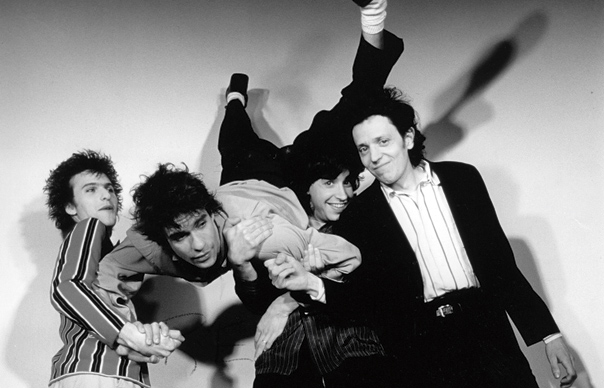 The world and nearly everyone in it has been reduced to trembling excitement by the return of David Bowie, but for some of us there is another recent resurrection perhaps even more miraculous and just as unexpected, a comeback by The Replacements, who today release online the Songs For Slim EP, their first new recordings in more than 20 years.

A bunch of rowdy, reckless delinquents inspired by punk, fuelled by a legendary intake of drugs and alcohol, and led by Paul Westerberg, the raw-voiced laureate of pre-grunge teenage nihilism, The Replacements were part of the Minneapolis scene that also spawned Husker Du and in the early-80s they held the line against a floodtide of mind-numbing heavy metal and flatulent, air-brushed AOR, buying time for the assembling shock troops of hardcore and the grunge battalions who followed.

Nearly a decade before Kurt Cobain and Eddie Vedder gave urgent voice to the desolation and frustration of America’s disenfranchised youth, Westerberg’s songs described a landscape of apathy, frustration and suffocating aimlessness. The world his songs evoked was a bad place to be if you were young and angry, butting heads with authority, the hassling demands of parents, teachers and the law. By rights The Replacements should have been what REM became with Green and Nirvana and Pearl Jam became with Nevermind and Ten.

They came closest to mainstream success with 1987’s Pleased To Meet Me, but their own appetite for destruction was their eventual undoing and by 1990’s All Shook Down – a brilliant but unnervingly bleak and wasted epitaph, original called Dead Man’s Pop – it was all over for them. Westerberg went on to an erratic, sometimes inspired solo career, bassist Tommy Stinson fetched up in Guns N’Roses, drummer Chris Marrs retired from music and became a successful artist. Guitarist Slim Dunlap toured with ex-Georgia Satellites lead singer Dan Baird and recorded a couple of solo albums, The Old New Me (1992) and Time Like This (1996) before dropping out of view.

Their influence was profound on the roots rockers, specialists in orphaned and any number of uppity young outsider brats with loud guitars, attitude to spare and a taste for wayward behaviour who followed them, and there’s been a regular clamour since they split among die-hard fans for them to get back together. A world without them and the racket they made has on the whole not been as great as a world with them in it, making the noise that made them unforgettable. Westerberg has for just as long resisted, sometimes morosely, the idea of a reunion, but recent circumstances have evidently contributed to at least a temporary change of heart.

As previously reported in Uncut, in February 2012 Slim Dunlap suffered a major stroke that left him hospitalised for nine months and in need of 24-hour care for the rest of his life. As part of a project called Songs For Slim, intended to raise money to pay Dunlap’s on-going medical expenses, Westerberg and Stinson went into the studio last September with drummer Peter Anderson and guitarist Kevin Bone, to record for the first time in two decades as The Replacements. The results of the sessions were first released as a limited edition of 250 vinyl copies last December and auditioned online, the run reportedly selling out for over 100,000 dollars, and from today you can buy a digital copy, a 12 inch vinyl version following, on April 16.

I’m listening to it now and on it you can hear a lot of the things that made The Replacements so great. It starts with a cover of Dunlap’s “Busted Up” that brings to mind the raw stomp of the Stones’ “Can I Get A Witness”, Westerberg whooping it up over a thunderous Bo Diddley backbeat and demented bar room piano, the thing ending with a rupturing guitar solo, cruelly cut off just as it sounds like it’s going to cut loose completely, a wicked tease. Chris Marrs declined the invitation to join Westerberg and Stinson in the studio and instead contributes a version of another Dunlap song, Radio Hook Word, on which he plays all the instruments, sings and produces. The results are a raucous gas. There are three more covers. An unlikely cover of Gordon Lightfoot’s “I’m Not Sayin’” is resplendent with the flavour of umpteen Replacements’ classics of yore, while Leon Payne’s venerable “Lost Highway”, most commonly associated with Hank Williams, sounds like it could have come from Westerberg’s great 2003 solo album, Come Feel Me Tremble, with some sensational guitar rowdiness. The EP closes out with the kind of jazzy show tune that Westerberg has always had a fondness for, a version of “Everything’s Coming Up Roses” from the Broadway musical Gypsy, which is both hilarious and touching.

Will this lead to a full-blown Replacements reunion? It’s predictably up in the air. Stinson sounds keen to keep things going, but Westerberg typically has yet to make up his mind. We live, meanwhile, in hope.