The Making Of… The Doors’ Riders On The Storm

With the remastered “fictional documentary” Feast Of Friends set to be released properly for the first time on November 11, here’s a piece from the Uncut archives (February 2007 issue, Take 117) – a look at how The Doors created the epic closer to their final studio album, LA Woman, which would prove to be Jim Morrison’s haunted, spiritual swansong. Ray Manzarek, Robby Krieger and John Densmore tell the story… Words: Mick Houghton 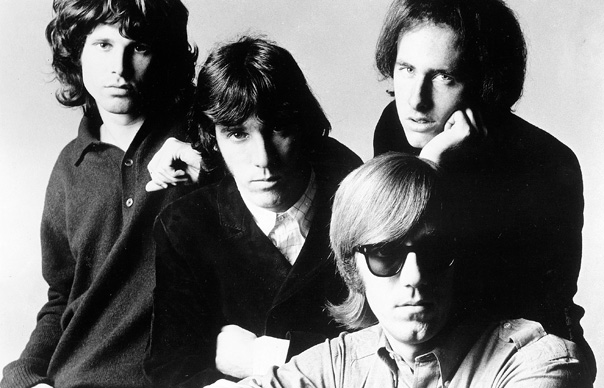 With the remastered “fictional documentary” Feast Of Friends set to be released properly for the first time on November 11, here’s a piece from the Uncut archives (February 2007 issue, Take 117) – a look at how The Doors created the epic closer to their final studio album, LA Woman, which would prove to be Jim Morrison’s haunted, spiritual swansong. Ray Manzarek, Robby Krieger and John Densmore tell the story… Words: Mick Houghton

By the time The Doors came to make their sixth and final studio album, LA Woman, they were close to collapse. Their tour at the end of 1970 had been disastrous. Jim Morrison was charged with indecent exposure in Miami in September, then apparently suffered a breakdown at the band’s last ever show in New Orleans. But LA Woman was the LP that pulled them back from the brink, breaking new ground with its mesmerising seven-minute epic, “Riders On The Storm”. The final track on the final Doors album, its irrepressibly maudlin lyric would serve as their singer’s sultry, rain-washed epitaph.

The LA Woman sessions began badly in November 1970. The band fell out with their long-term producer, Paul Rothchild, who quit two weeks in, unwilling to go another six rounds with an increasingly drunken, unpredictable singer. The Doors then elected to produce the album themselves, with help from regular engineer Bruce Botnick. The decision to record in their own two-storey workshop rather than a hired studio also re-energised the band, and they wrapped the entire LP in five days. They began mixing the following March but, even before completion, Morrison had re-located to Paris. LA Woman was released in June and it quelled any doubts that The Doors were a spent force.

In the weeks before Morrison died on July 3, 1971, he intimated to John Densmore that he would soon be ready to record again. As it was, released shortly after the singer’s death, “Riders On The Storm” would become his haunted, mesmerising swansong.

Today, Densmore is pragmatic about what might have been: “Either Jim would be a drunk playing blues in a club, or a vibrant, creative artist, clean and sober like Eric Clapton.”

Ray Manzarek (keyboards): “Robby and Jim were playing, jamming something out of ‘Ghost Riders In The Sky’. I proposed the bassline and piano part; the jazzy style was my idea. Jim already had the story about a killer hitchhiker on the road. Serial killers are all the rage now, but in America they go back to Billy The Kid. In essence, it was a very filmic song about a serial killer – way ahead of his time in 1970. Interestingly, Jim was pulled in two directions – he didn’t want to complete the song just about a killer hitchhiker. The last verse: ‘Your world on him depends/Our life will never end/You gotta love your man.’ It becomes a very spiritual song; you won’t still occupy this body, but the essential life will never end, and love is the answer to all things. It gives the song a different perspective.

“It was the last song recorded by The Doors and the whisper voice is the last singing that Jim ever did in the studio, in the background on the ride out. How prophetic is that? A whisper fading away into eternity, where he is now. Viewing it from the outside, you can put a neat little bow on it and see it as our last performance, but for us we were just playing our butts off. Fast, hard and rocking, but cool and dark, too. Every Doors song has its own spirituality, its own existential moment. Jim had a great mind and when we were starting out, he said that in that year we had a great visitation of energy and that year for us lasted from 1966 until 1971. I love the sound of The Doors – I can become an outsider now and think to myself, that is one tight motherfucking band.”

Robby Krieger (guitars): “We were playing ‘Ghost Riders In The Sky’ and Jim was fooling around and came up with ‘Ghost Riders On The Storm’. When we recorded it, Jerry Scheff, the bass player, just played what Ray was playing with his left hand and that’s why it’s so distinctive. It’s not something a bass player would come up with – it has more of a jazzy melody to it.

“As normal, we played the songs to Paul Rothchild and he just didn’t dig it. He was bored and said, ‘“Riders On The Storm” was like cocktail music.’ I didn’t know what to make of that. He’d just made an LP with Janis Joplin [Pearl], and possibly he thought The Doors were going downhill and there were better pastures for him. It was a shock and, at first, it was suggested that I produce the record, but then we decided that we would all produce it with Bruce.

“We adapted our rehearsal room, bringing in a portable board, a kind of forerunner of today’s ProTools set-up. We were comfortable there, plus there were two titty bars next door. It was the fastest time we recorded anything after the first album, all recorded live between the four of us, very few takes, Jim in the bathroom, with the door off. Not stoned, not drunk. Unless he was drunk, he was great to work with. Jim’s concentration level was low, but he was focused the whole time. After the first album, Paul Rothchild had said, ‘Boys, we better record as much as we can ’cause Jim ain’t gonna be around for too much longer.’ I always thought Jim would last forever. He was indestructible. He wasn’t saying Jim was going to die, but maybe go off and live in Africa or somewhere. You didn’t always know what Jim was going to do the next day so, as a group, we did everything for the moment.”

John Densmore (drums): “Jim always had notebooks of writings and poems to draw from and would just pull lyrics out from these. Jim had made the film, HWY, that was a road movie and he played the hitch-hiker who killed the guy that gave him a ride. It was out there, experimental. He called his friend, the poet Michael McClure, and pretended that he had actually committed a murder just to get a reaction. I’m not aware it was based on a true story, but Jim was a voracious reader as well as having a wild imagination.

“Paul Rothchild taught us how to make records, but he could be quite dictatorial. He thought ‘Riders On The Storm’ sounded like cocktail jazz, but he didn’t really listen to the darker underbelly of the song – only the lighter lounge feel. His quitting depressed us at first, but we rallied round. Paul suffered desperately as a result of Jim’s descent into self-destruction. He had a difficult time pulling vocals out of Jim from The Soft Parade onwards. But when we were doing LA Woman, Jim got empowered by the responsibility of making the record ourselves. He had to pull the vocals out of himself – that was the difference. After we’d finished ‘Riders On The Storm’, I had this idea, which I suggested to Bruce Botnick, that Jim went back in and did another vocal that was just whispered, and it’s really subliminal. Unless you know it’s there, you don’t hear it.

“Jim would sometimes go too far, but this time he was able to keep his problems and his alcoholism out of the studio. When we were doing concerts, Jim found it very difficult dealing with the adulation and being worshipped. He was always very hard on himself and would go over the edge. On stage, he was very volatile. It took a long while for the Miami hysteria to die down before we could think about playing live shows again, but it was a mistake to play those final few shows at the end of that year. New Orleans was a sad end but a relief. After he left for Paris, we didn’t know what we were going to do or what he was going to do. He talked about returning, but his heart was always searching.”

Bruce Botnick (engineer): “Paul Rothchild felt that he was responsible for The Doors being The Doors and that he had to keep it up to a certain level and to control it, because the guys couldn’t do this for themselves. Once we had taken it in, we were all thrilled Paul had taken a powder so we could create something without anybody telling us what to do. Afterwards, Paul said: ‘You did a great job, but I wouldn’t have done it that way – there were a lot of things I would have done differently.’

“It’s hard to remember the exact chronology – unfortunately a lot of the tape boxes and outtakes were destroyed – but ‘Riders On The Storm’, like everything else, took only two or three takes and, as an afterthought, we recorded Jim’s whispered vocal. We all thought of the idea for the sound effects and Jim was the one who first said it out loud: ‘Wouldn’t it be cool to add rain and thunder?’ I used the Elektra sound effects recordings and, as we were mixing, I just pressed the button. Serendipity worked so that all the thunder came in at all the right places. It took you somewhere. It was like a mini movie in our heads.”