An interview with Hiss Golden Messenger

The Father, The Sun And The Holy Ghost… 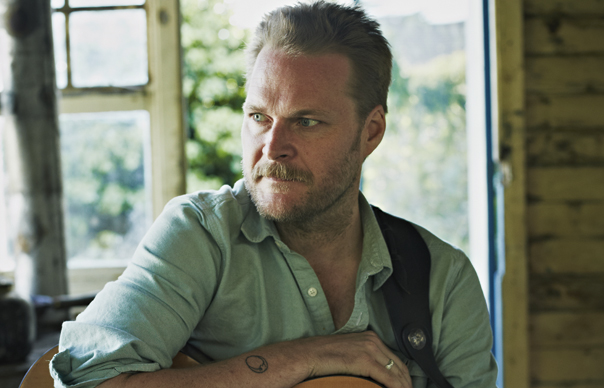 One bright Sunday morning, MC Taylor is driving through his patch of North Carolina, past New Hope Creek and the Eno River, over the Chatham County Line and the James Taylor Bridge in Chapel Hill, near the Haw River and the valley that he has meditated upon in song these past few years. Through apparently endless forests, Taylor’s destination is Saralyn, a kind of hippy settlement just outside of Pittsboro.

Turning off the main road, Taylor steers his Subaru along a narrow, winding track. Remote houses can occasionally be glimpsed among the trees, properties originally built and inhabited by a bunch of idealists, academics, artists and Buddhists who followed a local professor, Wallace Kaufman, out to Saralyn in the 1970s. Kaufman, it should be noted, wrote a book about his experience called Coming Out Of The Woods: The Solitary Life of a Maverick Naturalist. “This guy right here,” says Taylor, passing a house obscured by a high fence, “this guy is the foremost expert on heritage apple varieties in the southeast United States. He has a book called Old Southern Apples.”

After a few minutes, Taylor reaches a stone Buddha which marks, more or less, the end of the trail, close to the house where he moved with his family in 2009. Back then, he spent a lot of time walking in the forest, chainsawing trees for firewood. Sometimes the little creek, Brook’s Branch, would overflow its banks and turn the road into a lake, making the family feel more cut off than ever. It was this isolation, though, that provided Taylor with a means of accidentally relaunching his music career – a career that in the subsequent five years has brought four albums, a multitude of extra-curricular projects, and a body of work that’s as profound and rewarding as anything I’ve come across in that time.

“I was totally, totally lost,” Taylor says of that period now, when he recorded hushed songs as his new-born son Elijah slept, a clutch of kitchen demos that became a strikingly intimate folk-soul album, Bad Debt. “I mean, I’d been doing Hiss Golden Messenger, but I was pretty confused about what it could become, how I could get at the emotion I wanted to convey. I wasn’t really thinking it was gonna be a record, I was just trying to figure out how to write songs. Literally, there’s nothing on that record. But figuratively, I had to burn away all this confusion. I was at, like, zero at the time.”

As he parks the car, a tousled middle-aged man appears out of the trees, who Taylor will later describe as resembling a character from a Denis Johnson novel; Already Dead, maybe. This, it transpires, is David, an initially rather paranoid homesteader who is living nearby and who is reluctant to let Taylor go any further. “Let me see your eyes, dude,” he instructs the singer, who calmly takes off his Aviators. “Have we met before?”

They have not, but Taylor, evidently skilled at dealing with the locals, puts him at relative ease. “I was just like, ‘Who the fuck am I dealing with here?’” explains David. “I walk down here ‘cos I wanna keep an eye on shit, y’know?”

Taylor does. They talk for a while about off-grid living and shared wells, about the house that David plans to build in a new clearing. Eventually, Taylor gives up on his nostalgic mission. “Good luck man, this was awesome,” he says, then gets back in his car. “Well,” he continues, out of earshot, “that’s the vibe round here.”