The Beatles, Magical Mystery Tour And The Ghosts Of Christmas Past

Boxing Day, 1967, and The Beatles’ new film, something called Magical Mystery Tour, is about to be shown for the first time, broadcast by the BBC, fans looking forward to what surely will be a highlight of the Christmas television schedules, a welcome respite to those of a certain age from the usual seasonal fare of old movies and light entertainment, all that stuff that they usually show to keep the old folks happy over the holidays. 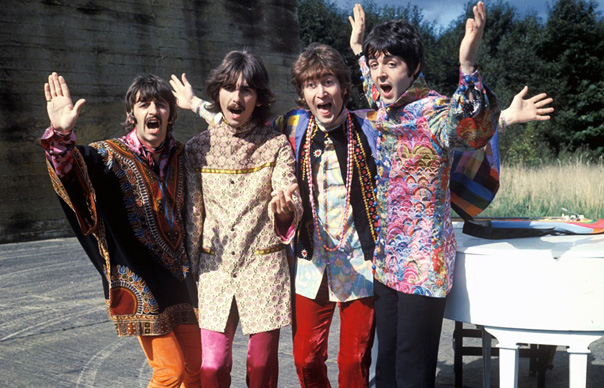 Boxing Day, 1967, and The Beatles’ new film, something called Magical Mystery Tour, is about to be shown for the first time, broadcast by the BBC, fans looking forward to what surely will be a highlight of the Christmas television schedules, a welcome respite to those of a certain age from the usual seasonal fare of old movies and light entertainment, all that stuff that they usually show to keep the old folks happy over the holidays.

As usual, our house has been full all day, following the boisterous afternoon arrival of relatives, an uncommonly merry throng, who are quickly knocking back every drink they can lay their hands on and thus by mid-evening are mostly pretty plastered and given therefore to much raucous playfulness and bouts of singing, a regrettable noise for the most part, led by my Uncle Ken in a party hat. He first of all commands the floor with a fearfully raucous version of Ken Dodd’s “Happiness”. When his jocular mood turns suddenly maudlin, as it usually does at such gatherings, a spectacularly tearful interpretation follows of “Have I Told You Lately That I Love You?”, that makes him sob quite uncontrollably, like someone who’s lost everything in disastrous circumstances that have left him wholly bereft, the end of the world itself unlikely to make him more distraught.

Everyone shouts at him to stop what’s by now become an unearthly caterwauling, the keening wails of the recently bereaved, his wife, my Auntie Jenny, to whom his spectacularly lachrymose performance has been presumably directed, chief among those threatening him with violence if he doesn’t shape up and pull himself together. At the high point of his wretched blubbing, she fetches him what from where I’m sitting in front of the TV appears to be a rather brutal thwack between his heaving shoulder blades with her handbag, which she wields with enough force to knock down a small wall, a well-practised swing it looks like to me.

In an earlier tantrum I had insisted in a fit of the foot-stamping histrionics that I was expert at that whatever else was on Boxing night TV, we had to watch this Beatles film, Magical Mystery Tour, and bugger the relatives, who would just have to sit through it, and hopefully without noisy complaint, witless comment, muttering disparagement or elsewhere any evidence of the teeth-sucking disdain in which pop music in any manifestation was held by them. It helped a little that we’d be watching The Beatles, who by virtue of a certain cheeky mop-top wholesomeness were not quite seen to be allied to the forces of an appalling darkness that most pop groups of the era were taken to be. The Rolling Stones, particularly, were, in the collective opinion of these disapproving elders, mere degenerates, obnoxious, vile and fit for not much more than a public whipping. There were people here who would probably rather set the TV on fire than watch the Stones on it, even if it meant the house burning down.

So there anyway we all were, the family gathered around in what by then was something less than yuletide harmony with clucking aunts, boozy uncles, snotty wheedling cousins. From the latter’s collective disinterested slouch you could tell they’d been dragged from their own homes under the promise of unavoidable punishment if they dared misbehave. They sat therefore in sullen misery, all the woes of the world as nothing compared to their current sulking distress.

When the programme starts, I make clear with a glare that, you know, I’d like the next 60 minutes or so to pass without disruptive intervention, distracting chat or, God forbid, any singing. Uncle Ken is thankfully very quickly asleep, party hat askew on his head. For about 10 minutes, everyone else assumes a stoic sort of silence, baffled by the lysergic whimsy on screen, The Beatles on their charabanc going who knows where with no great apparent purpose. The film’s fairly free form aimlessness soon becomes, however, a sore test of their patience, which you can almost hear being scraped to the bone. The longer it goes on, the more uncomfortable everyone gets, no one terribly amused, entertained or otherwise engaged by what they’re watching, which even I have to admit is beginning to feel like a bit of a let down, although torture wouldn’t have made me confess to even the most fleeting disappointment.

As Magical Mystery Tour ends, though, the rest of the family, and all those uncles and aunts and cousins, are grim-faced, their own glum assessment of what they’ve sat through echoed loudly the next day when the critics rip into the film, which they all seem to think has been a disaster. I couldn’t quite muster up the enthusiasm to watch it again, when it was repeated a few nights later on BBC2, and haven’t seen it since. It’s only been shown once more on TV, in 1979, which I hadn’t realised until this morning when it was announced that on Saturday [October 6], a digitally re-mastered version will be screened on BBC2, following a new Arena documentary on its making. I’ll no doubt have another look, hopefully more hip to things I missed that Christmas, 45 years ago, when as soon as it was over, Uncle Ken, waking from his brief stupor was soon singing again, to everyone’s groaning dismay.