The Allah-Las make their UK debut in the back room of a north London pub on a freezing December night, the inhospitable weather not something familiar to in their native Los Angeles, where it probably only gets this cold in disaster movies, palm trees turning brittle with frost, the ocean becoming ice, CGI snow drifts on Sunset Strip and Denis Quaid in a parka and Bermuda shorts standing square-jawed and wrinkled-kneed against the elements. 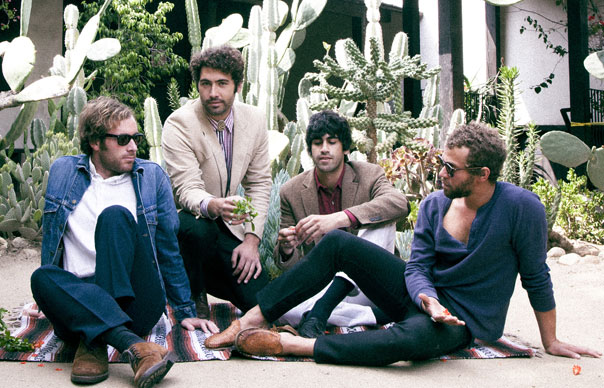 The Allah-Las make their UK debut in the back room of a north London pub on a freezing December night, the inhospitable weather not something familiar to in their native Los Angeles, where it probably only gets this cold in disaster movies, palm trees turning brittle with frost, the ocean becoming ice, CGI snow drifts on Sunset Strip and Denis Quaid in a parka and Bermuda shorts standing square-jawed and wrinkled-kneed against the elements.

How sweet it would be to report that for at least the brief time they are on stage, the crowd that had turned out to see them were transported from London’s winter chill to the enveloping warmth of a notable California night, the scruffily homely venue where they are appearing transformed into the Troubadour or Whiskey A-Go-Go, one of those legendary venues where once you would have seen some of the bands the Allah-Las on their terrific self-titled debut so often remind you of, like Love or The Byrds. It doesn’t happen, though.

Good as the Allah-Las turn out to be, they are not yet in the business of performing miracles. Give them time, though, and who knows what they may prove capable of. It’s still early days, after all and if they aren’t fully practised in the art of the miraculous, then there’s still a certain magic about a lot of what they do that turns their retrospective musical inclinations into something conversely fresh, as if their career trajectory to date has been a case of reversing into tomorrow.

Their album, greatly admired in this particular neighbourhood, features much harking back to a glorious yesterday. If its songs weren’t in every instance so good, it could pitifully have been little more than an exercise in nostalgic fetishism, a pathological obsession with the paraphernalia of the past. As it stands their reported preoccupation with valve amps, the right kind of microphones, mixing desks and studio set-ups are at the service of an exciting impulse that makes the listener believe they are listening to something that was recorded in 1965 or 1966, a little ahead of a swing towards the fully-blown psychedelic.

There’s never a truly bad time, of course, to listen to anything from Love’s Forever Changes. But playing “You Set The Scene” and “A House is Not A Motel” over the PA just before the band appear feels less appropriate than a quick blast of something like “My Little Red Book”, say, or “My Flash On You”, from Love’s earlier repertoire, as much as it would have been odd if we’d been treated to something from Their Satanic Majesties Request instead of Aftermath, the Allah-Las as similarly beholden to the Stones of “Stupid Girl” and “Under My Thumb”.

Set opener “Don’t You Forget It” demonstrates as much, Miles Michaud’s vocal as cool, haughty and dismissive as the young Mick, with just the right hint of kiss-off menace – “I think I found a girl that I can talk to/Yeah, I think I found a girl who might replace you” – with Pedrum Siadation nagging’s guitar figure providing a suitably taunting counterpoint. “Tell Me (What’s On Your Mind)” occupies similar territory, with added backbeat and booming bass. Its mocking lilt is at first almost innocuous and then darkly insidious, its chorus a callous put down. “Tell me what’s on your mind,” Michaud sings, “because I can’t find it.”

Album highlight “Busman’s Holiday”, with its ominous drum rumble, cymbal splashes and spiky guitar is more primal, like something straight off Nuggets, and sounds at point like it’s going to end up as “Paint It, Black”. “Sandy”, with its murmuring echoes of The Yardbirds’ “For Your Love”, is just as good, Michaud’s voice grainier here than elsewhere, a slight but appealing hoarseness to his delivery that could be deployed more often.

Drummer Matthew Correia takes over vocal duties from Michaud for the slightly creepy “Long Journey”, which closes the album and also tonight’s show, the end of which has suddenly arrived after something like 45 minutes and 10 songs. The set’s a bit of a master class, really, in keeping to things to the point, played out more or less brilliantly, without windy digression or unnecessary elaboration.

They’re in Brighton tonight, and play Liverpool on Wednesday and Manchester on Thursday. If you’re anywhere in the area, don’t miss them, whatever the weather’s like.