Around the turn of the millennium, Jeff Tweedy merrily nurtured a reputation as a contrarian. How best could a man, sanctified as the archetype of what was once called alt-country, confound his fans? With antsy powerpop? Radio static? Fifteen-minute ambient noise jams? The recruitment of a fiendish avant-jazzer to take over on lead guitar? A song for a Spongebob Squarepants movie? 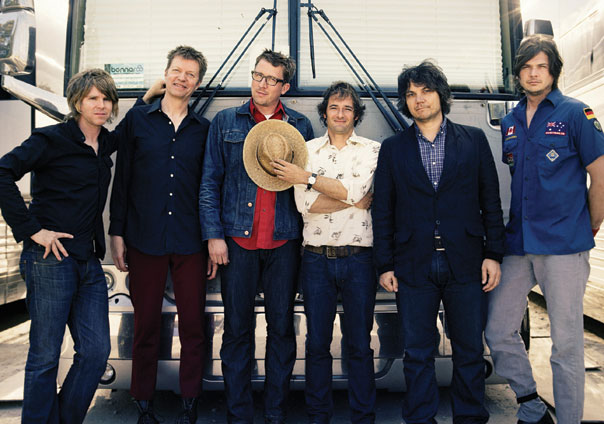 Around the turn of the millennium, Jeff Tweedy merrily nurtured a reputation as a contrarian. How best could a man, sanctified as the archetype of what was once called alt-country, confound his fans? With antsy powerpop? Radio static? Fifteen-minute ambient noise jams? The recruitment of a fiendish avant-jazzer to take over on lead guitar? A song for a Spongebob Squarepants movie?

What might look perverse at the time can, of course, be thrown into an uncannily logical light by history. So it is with Alpha Mike Foxtrot, a 4CD boxset that celebrates Wilco’s 20th anniversary by telling their story through 77 tracks of marginalia. It’s a clever idea, not least because Wilco have become the sort of band defined by the nuanced depths of their catalogue, one whose fans have long been encouraged to treat apparent obscurities – the 2002 singalong b-side “A Magazine Called Sunset”, say – as critical parts of the canon. The tour page of Wilco’s website contains a “Request a song” function for every show; a challenge to be obtuse, perhaps, that Alpha Mike Foxtrot will only exacerbate.

As a result, a companion 2CD greatest hits set, What’s Your 20: Essential Tracks, is terrific but somewhat extraneous, Wilco generally attracting obsessive fans rather than casual ones (no new tracks are included on What’s Your 20 to bait the completists). The hardcore might feel a little disappointed that there is no unreleased content on Alpha Mike Foxtrot, either, though even the most committed collector may have struggled to stay abreast of the various bonus discs, downloads, b-sides and tribute albums from which the tracklisting has been assembled. An oddly faithful, entirely creditable 2000 stab at Steely Dan’s “Any Major Dude Will Tell You”, for example, is salvaged from the soundtrack to Me, Myself & Irene.

At times, in his wry sleevenotes, Tweedy seems to decry the notion of continuity. “Listening back to stuff like this, I don’t know how we got from where we were to where we are. It’s been a strange, strange path,” he wonders, confronted with a workmanlike country-rock take on Jim Glaser’s “Who Were You Thinking Of”.

For all the shifts in tone and lineup, however, it is Wilco’s underlying consistency that is most striking – or rather, the consistency of Tweedy’s hesitant, sometimes fractured, way of unravelling a song. It’s a self-effacing quirk that remains charming rather than affected, even 20 years after the discreet twang of a gem like “Promising”, or 18 on from the lovely “Blasting Fonda”, another lost song from a movie, Feeling Minnesota.

That fragile songcraft does not stand up to all the things that have been thrown at it. Tweedy sounds lost in Randy Scruggs’ mainstream Nashville production of “The TB Is Killing Me” for a 1994 Red Hot + Country comp. The fraught end of Wilco’s tenure with Reprise, meanwhile, results in a gimmicky radio remix of “Shot In The Arm” by the antagonistic head of A&R, David Kahne. “A dated mess,” reckons Tweedy, not unreasonably, of a track clearly included for historical rather than aesthetic reasons.

Other songs from the end of the ’90s fare better. “The Lonely 1 (White Hen Version)”, from 1997, is a precursor of the layered soundscaping that would come to full fruition on Yankee Hotel Foxtrot, with the band making a field recording of their walk from the studio to buy cigarettes, then chopping it up and using it as an effective backdrop to the song. “That might be the first example of our using a process as a way to be creative,” Tweedy notes.

The tense, low-key experiments from the time of Yankee Hotel Foxtrot are predictably among the best songs here. One Tweedy/Jay Bennett co-write, “Cars Can’t Escape”, with a distorted noise solo at the death that never disrupts the restrained vibes, is especially strong. A tipping point comes, though, two-thirds of the way through Disc 3, with the arrival of the master guitarist Nels Cline and the multi-tasking Pat Sansone, and the stable lineup that has endured for the past decade. A slew of live tracks – “At Least That’s What You Said”, from 2004, and a rearing 2007 take on the Television-like “Impossible Germany” may be the pick – illustrate the questing virtuosity that has become Wilco’s default setting. “Sort of like a small version of The Dead,” reckons bassist John Stirratt in the sleevenotes. “I think we’ve been able to attract fans who have created their own culture around us.”

It’s a culture manifest in Alpha Mike Foxtrot: encyclopaedic, loving, droll, emotionally candid, often adventurous, but never really as alienating or difficult as the legends might suggest. “I’ve got a million things that I’d rather do than play rock’n’roll for you,” sings Tweedy at the start of “Let’s Not Get Carried Away”, a fine, refusenik take on Stones raunch from 2007. He is, though, kidding no-one these days. “These lyrics were meant to be funny, but I think people might have taken them more seriously than I meant them,” he writes. “Maybe the reason it didn’t make it on any record is because the drum solo is way too short.”