Sufjan Stevens' new Christmas compilation, Silver & Gold: Songs For Christmas, Vols. 6-10, is out now, and reviewed in the new issue of Uncut, dated January 2013. Graeme Thomson tackles the mammoth album in the reviews section of the new issue, in shops now, and also interviews Stevens about the project – a short excerpt can be found in the issue, but below is the pair's full conversation… ______________________________ 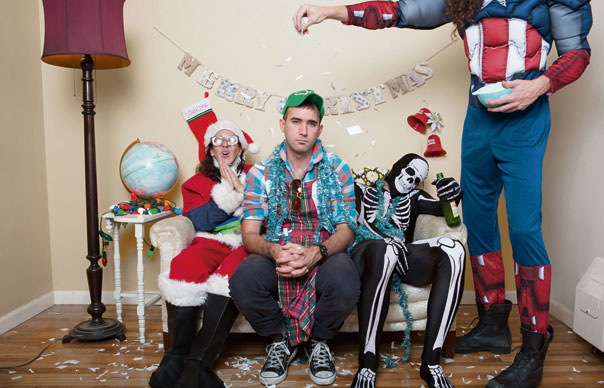 Graeme Thomson tackles the mammoth album in the reviews section of the new issue, in shops now, and also interviews Stevens about the project – a short excerpt can be found in the issue, but below is the pair’s full conversation…

Uncut: How do you recruit your guests for these Christmas projects?
Sufjan Stevens: Proximity, friendship, and happy accident. I’m not too fussy about talent, either. If you have a pulse and can shake a sleigh bell, I’ll recruit you. I’m an otherwise solitary musician so these Christmas sessions are a healthy break from that lonely voyage called songwriting. Also, Christmas is not cool; I suppose I enjoy imposing its kitsch on all my cool musician friends.

Do you consciously set out to write a song like “Happy Karma Christmas”, or does a seasonal song just evolve?
Usually the slogan predicates the song. Christmas is like white rice; it goes with everything. Add any word to it (Lumberjack, Infinity, Spirit Catcher) and it becomes an immediate feast, or a Dada exercise, at least. “Karma” and “Christmas” also feel like unlikely bedfellows, so it was fun to throw them together as a weapon against a past infatuation. It doesn’t always work. “Christmas Custody Battle” did not make the cut. Nor did “Christmas Boner”.

Thinking of the classics of the genre, what component parts does the perfect Christmas song have to have?
The elusive Christmas hit usually has an indelible melody, clever wordplay, and juxtaposition of conflicting consciousness: joy and heartache, or sacred and profane. Christmas is a Catch-22. We celebrate “God made man” with luxurious feasts and revelry in the dead of winter, when nature is least inviting. The best Christmas songs (even the secular ones) tap into this bi-polar emotional field. “I’ll Be Home For Christmas” looks sentimental on the surface until you get to the last line (“…if only in my dreams”) and recall the context in which it was proliferated: it was commonly sung at USO shows during World War II. It’s both a sentimental love song and a depressing military anthem.

How serious is your intent on the Christmas releases? The mix of the sacred and the playful can be heard in your other music too…
My approach is somewhat anthropological and this might explain the intention behind some of it. At its core, Christmas has a mysterious punchline: the incarnation of God as a Christ-child. This is weird. Consider the details: angel visitations, teenage pregnancy, shot-gun wedding, the massacre of the innocents, the wise men following an astrological phenomenon, gold, frankincense, and myrrh. It’s a Hollywood blockbuster. Mix all that with contemporary pop adaptations: Frosty, Rudolph, Santa, the Grinch, etc., and you have a veritable chop salad of sacrilege. Not to mention the elements of capitalism and consumerism the western world has imposed on it. We have made Christmas our bitch, for better and for worse. These EPs are desperate to find meaning in all of that, I suppose, both sacred and profane.

Will there be more Christmas Songs?
Christmas is forever!

How advanced are your plans for a follow-up to The Age Of Adz?
I’ve been so caught up in fun projects that don’t amount to the conventional album, writing ballet music, exploring that Planetarium thing with Bryce [Dessner] and Nico [Mulhy], and now another Christmas pageant. Diversifying my career since people don’t buy albums anymore.