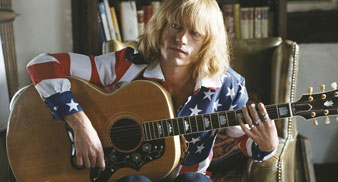 Stoned, director Stephen Woolley told Uncut back in January, isn’t so much a straightforward biopic of late Stones’ guitarist Brian Jones but a murder mystery and a “parable of the times”.

At the film’s core is the relationship between drug-addled fop Jones (Leo Gregory) and working class builder Frank Thorogood (Paddy Considine) – who reportedly confessed to murdering Jones in 1969 on his deathbed. It’s an exciting proposition, and the film promised to be an intense psychodrama played out against the rich backdrop of Sixties rock ‘n’ roll decadence.

Woolley, a force majeure in the British film industry thanks to his producer’s credits on movies like Mona Lisa, The Crying Game, Backbeat and 24-7, is here making his debut behind the camera. And while Stoned is competent enough, it also feels unforgivably lazy in places.
A key problem lies in the characterisations of Jones and Thorogood. They’re both distinctly unlikeable people – Jones is vain, insecure, passive-aggressive while Thorogood comes over as a near-autistic sociopath. At no point does Woolley’s film attempt to explain how they came to be like this – nor, crucially, does it explore what it is that drew them together in the first place. Mutual dependence? Latent homosexuality? Gregory gamely grabs Jones’ effete hedonism but Considine – so impressive in A Room For Romeo Brass, Dead Man’s Shoes and My Summer Of Love – fails to bring his usual, screen-burning intensity to bear here.

Woolley mounts the film brilliantly in the muted, grainy stock of the time – and there’s sly references to Kenneth Anger, Performance and Blow-Up in there, too. But there’s something dreadfully sloppy about soundtracking Jefferson Airplane’s “White Rabbit” over an acid trip sequence. The film is noticeably bereft of Stones music, Woolley making do with a smattering of covers.

Much of the narrative exposition is shoddy, too. There’s little on screen to indicate why Jones’ girlfriend Anita Pallenberg (Monet Mazur) would particularly seek solace in the arms of Keith Richards (Ben Whishaw, last seen as the hapless Pingu in Nathan Barley), for instance.
It’s certainly not Carry On Brian, but neither does it deliver as an unflinching expose of rock ‘n’ roll murder.

Stoned is released in the UK in November