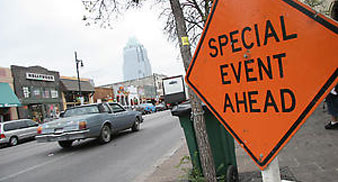 Day Three of SXSW, and it’s time to go off in pursuit of this year’s buzz bands: the mystically powerful new acts that have a pack of A&Rs trailing them from party to party. As we mentioned the other day, the most talked-about one this year is Tapes’n’Tapes from Minneapolis, who we finally track down at 1am tonight. First, though, there’s another 16 bands to work through.

We’ll spare you the details of them all. A good afternoon at the Insound party, starting with the excellent Love Is All. They have all the requisites for success this year: a sound that veers between cutesy and dissonant, jolly and anxious; a certain nerdiness; a few massed shouts in the vein of The Arcade Fire. But there’s also a distinct Slits and X-Ray Spex influence, and an exuberance that marks them out as a punk-funk Sugarcubes.
Pink Mountaintops we’ve written about at length in Uncut already, being the side project of Black Mountain’s frontman, Stephen McBean. Live, though, they’re far from the lo-fi solo thing we expected, being a seven-piece – with two drummers – who lock into the edgy ramalam of Loaded -era Velvets.

Finally at this party, there’s Sereena Maneesh, a daftly portentous but entertaining bunch of Norwegian goths who’ve a much better understanding of My Bloody Valentine (“Feed Me With Your Kiss”, specifically) and theatre (the giant, thrusting Nico lookalike on bass) than most new shoegazers.

Over at the Pitchfork party, Jose Gonzales is being diffident and endearing, and Hot Chip are kicking up their little-boy-lost techno a gear. We push on, though, to a van in the Mexican district, where New Zealand indie lifers The Bats are proving an unlikely antecedent to The Strokes’ wiry jangle.
And onwards. LA’s Giant Drag recast Catpower as grunge-pop stand-up comedy. San Francisco’s Colossal Yes play brilliant unravelling piano ballads in the style of Van Dyke Parks’ Song Cycle. Kelley Stoltz is a frayed powerpop auteur, at least a match for Brendan Benson, but lacking that critical Jack White connection. Seattle’s Band Of Horses, meanwhile, involve some pretty violent thrashing of a lap steel, invoke My Morning Jacket, Mercury Rev and Built To Spill, and are possibly the best thing Uncut has seen all week.

Which only leaves the already legendary Tapes’n’Tapes. Who are, perhaps inevitably, a bit of a disappointment. Dorkiness remains de rigueur, the songs are OK, and the singer’s stern baritone makes a change from the nasal shrillness of his contemporaries. But the self-consciousness still grates: aren’t last year’s champion buzz band, Clap Your Hands Say Yeah, all we really need of this stuff?