It’s possible to view the career of Sam Raimi as one might a musician of a certain stripe. The successful early indie releases, followed by uneven attempts to navigate the mainstream landscape; a dedicated fanbase for whom those formative cult projects are sacrosanct. 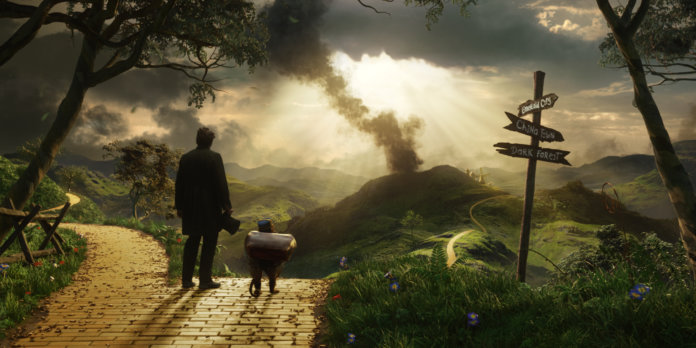 It’s possible to view the career of Sam Raimi as one might a musician of a certain stripe. The successful early indie releases, followed by uneven attempts to navigate the mainstream landscape; a dedicated fanbase for whom those formative cult projects are sacrosanct.

To be honest, although I’ve enjoyed some of Raimi’s films, I’ve never entirely understood why people continue to make a fuss about his films. The first two Evil Dead movies, with which made his name, were inventive, grisly fun – I always felt he followed in the tradition of George Romero and John Carpenter, who’d also successfully made the most of penuriously tight budgets at the start of their careers. And the Spiderman movies, of course, made a lot of money and legitimized Raimi as a major studio filmmaker after a number of projects of varying quality.

Raimi’s latest is Oz, The Great And Powerful. Essentially a prequel (ach, that word) to the 1939 MGM musical, it feels an awful lot like an attempt by Disney to replicate the staggering success of Tim Burton’s Alice In Wonderland – another much-loved children’s story reimagined by a film maker of similar predilections to Raimi. But both films are hamstrung by the same things – on one hand, an awkward attempt to honour the look of the original using top range contemporary technology, and on the other by a lack of nuanced human drama and character development.

Burton is another filmmaker like Raimi who perhaps best operates when in a slump: I’m thinking of Frankenweenie after Dark Shadows, or Charlie And The Chocolate Factory after Planet Of The Apes and Big Fish. Specifically, I think Raimi’s best film came out of the period after the failures of Army Of Darkness and The Quick And The Dead. At best, Raimi’s early career is checkered – literally, a hit followed by a miss – for every The Evil Dead, a Darkman. But after The Quick And The Dead, he gives up movies for three years to concentrate on developing his Hercules TV series. He comes back with A Simple Plan in 1998, an excellent, thoughtful thriller about two brothers and a friend who find $4 million inside a crashed plane in the snowy Minnesota countryside.

Inevitable comparisons to Fargo aside, A Simple Plan is a terrific character piece – usual for Raimi, who’s never been especially strong in that area – with three excellent performances from Bill Paxton and Billy Bob Thornton as the two brothers and Bridget Fonda as Paxton’s wife. It’s a study in greed, as the plan to split the money equally come spring gradually falls apart – a riff on a Canterbury Tale. Raimi reins in his usual kinetic camera tricks, and shoots everything like a snowy film noir – there’s brilliant shots of black crows sitting on spindly tree branches filmed against the muted, white Minnesota landscape. There’s a sense of consequence, too: broadly, Raimi’s violence is cartoonish, or throwaway, but here as the story develops and double crosses become triple crosses you sense the weight of each, grim decision making its mark on the film’s characters.

I wish Raimi had made more films like A Simple Plan. Everything since seemed to regress back to EC-style horror capers or superhero movies – again, of variable quality. It’s hard to imagine him returning to this kind of intimate, character-driven piece – but I wish he would. A Simple Plan is a very good film indeed.