“I am guilty,” says Roy Harper, “of taking you on some strange journeys, I have to admit.” We are two songs into a solo Harper show to mark the release of his first new album in 13 years, taking place in a record shop (Rough Trade East) and being streamed live on the internet; a confluence of events that clearly amuses the singer on some essential and bemused level. 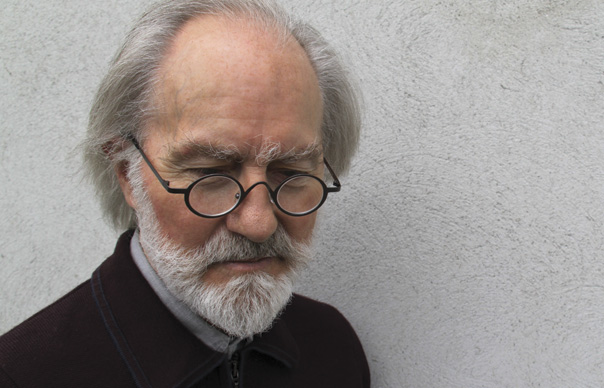 “I am guilty,” says Roy Harper, “of taking you on some strange journeys, I have to admit.” We are two songs into a solo Harper show to mark the release of his first new album in 13 years, taking place in a record shop (Rough Trade East) and being streamed live on the internet; a confluence of events that clearly amuses the singer on some essential and bemused level.

Thus far, he has reconstructed Dylan’s “Girl From The North Country” as brittle, almost ethereal English folk, stretching its climax into a series of forlorn wails that reveal his voice has weathered miraculously well these 72 years. Before acknowledging the release of “Man And Myth”, he has celebrated the “50th anniversary” of “Legend” (the anniversary of its writing, presumably; it surfaced on “Sophisticated Beggar” in 1966) and prefaced it with a lengthy digression on the influence of TS Eliot and Rousseau.

In his conversation, as much as in his music, Harper’s longeurs are critical to his charm; the further he meanders, the deeper he gets. Tonight, though, he is on relatively economical form: eight songs in an hour represents a pretty frantic pace by his normally leisurely standards. Four of them, understandably, come from “Man And Myth”, and in some cases flourish in this unadorned state: the gentle progressions of “Time Is Temporary”, with its prickly, fingerpicked punctuation; “The Enemy”, especially forceful and plaintive.

“The Stranger” has the tough job of following a gorgeous version of “Another Day”, but it’s a mark of the new songs’ strength that there’s no alarming drop in quality here. These are elegiac and labyrinthine constructions that show Harper has lost none of his brackish mystique or scholarly nimbleness. It’s a shame that he couldn’t find room for the 15-minute reverie of “Heaven Is Here”, but there’ll be other nights for that.

Instead, Harper finishes with the deathlessly lovely “When An Old Cricketer Leaves The Crease”, performed with the requisite former England test player (Derek Pringle, who once scandalised the cricket establishment by wearing an earring, and who I once spotted towering above the crowd at an American Music Club show at the Astoria) in attendance. “Well this way of life’s recollection, the hallowed strip in the haze/The fabled men and the noonday sun are much more than just yarns of their days.”

An hour or so later, I make it up to Café Oto in Dalston to catch Oakland’s Date Palms, whose languorous instrumentals could have been baked in a heat haze. I wrote about one of Date Palms’ old albums, “Of Psalms”, a couple of years ago, and a lot of those observations still hold true for this year’s very fine “Dusted Sessions” set and the live show. Marielle Jakobsons and Gregg Kowalsky have now recruited a bassist and guitarist, though, so their live shows have a heft and intricacy that is a match for their records, and for one of their most obvious – at least to me – antecedents, Brightblack Morning Light.

Most songs begin with Kowalsky cueing up a loop or drone, often of the tanpura that figures so prominently on “The Dusted Sessions”. Slowly and methodically, the quartet map a pattern over the top, pinned down with a lugubrious, almost-funk bassline, from Ben Bracken, and Jakobsons providing further beatific cycles on either violin or flute. Kowalsky, meanwhile, adds intuitive flecks of electric piano, and Noah Phillips is equally spare on guitar: using a brush on his strings to create a fluttering ambience; once, briefly, wallowing into the space of Dave Gilmour.

It’s lovely stuff, at once heavy and featherlight; simple in conception, meticulous in detail, profound in impact. Sacred minimalist blues might work as a tag, though it might be better just to link to another track and let you take it from there. A good night out, anyway…