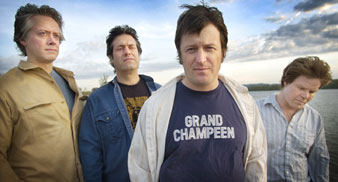 UNCUT: I understand the songs for the new album were written when you were holed up for two weeks at The Fitzgerald Casino hotel in Reno

WILLY VLAUTIN: Yeah, I wrote most of the lyrics at the Fitzgerald. All except for “The Janitor” and “Black Road.” But “Black Road” is set there at the Fitz. I wrote it after I got back. Mostly I wrote lyrics and stories when I was there. The music changed. I always stay there when I’m visiting home. Their rooms are $28 a night so you can stay a long time and they’re safe enough that you can keep your guitar there.

Tell us something about the hotel and its atmosphere.
It’s downtown in Reno on the strip and it’s a pretty nice place really. It’s the Irish casino. It has “Mr. O’Lucky”, a drunken lucky leprechaun statue, as you walk in. But he’s never been very lucky to me, I’m sorry to say. Everything in the place is green. It’s right near the railroad tracks so you can hear the trains going by. They still have lounge singers and they have Guinness on tap and roulette. I can always write when I‘m there. Reno‘s my favourite place to work on stories and songs. You can look out the window at the Fitz and see all of downtown. The strip itself and Fourth Street, which runs near it, are pretty rough.
There are a lot aimless men wandering around. I’m not talking about the tourists. I’m talking about these sorta damaged looking guys. Not bums, just men that have low level jobs and are hanging on by the skin of their teeth. You don’t see many women. Those sort of guys always make me feel comfortable. Being around them makes me feel normal. Plus in the summer, the Fitz hires Eastern European cocktail waitresses on some sort of exchange program so in the summer they have the best looking cocktail waitresses in the world.

Had you gone there specifically to write?
I go to Reno for maybe a month or more a year if I can afford it. I always go to write and just to walk around. Sometimes when I drive down there, I go another place called the Gold Dust West that’s sort of a motor lodge. But usually I stay at the Fitz. That time I did go to write songs and stories and to visit with my mom who thinks I’m crazy ‘cause I won’t stay at home. And that time, I sorta hit a vein I’d been thinking about. Once Post to Wire was done I felt relieved and I felt I could take a breather. And more than anything I like to write folk songs, story songs. I was pretty worried about anyone liking a folk record, but I figured I’d try hard to write a good one and if no one in the band liked it then I would shelve it. So right when Post To Wire was done I
worked on the Fitz songs.

Did you have any particular idea what the new album would be about before you started writing?
I really wanted it to be based around the lyrics and not the other way around. Most times I change around the lyrics to fit the music. I did that a lot on Post To Wire. On this record I didn’t want to do this. I just wanted to tell the story and have the music follow it. I wanted the whole thing to feel like the first song “The Warehouse Life.” That feeling that there’s mistakes and death and darkness all around and you’re trying hard not to run into any of it. You might see it and it
might scar you that way, but the hope that you don’t run into it. That you don’t become it. That you’re not the guy paying the price for gambling in “The Warehouse Life.” Or the murdered kid in “The Incident At Conklin Creek.” You’re just trying to hide from all that like in “Black Road.” Or in the “The Janitor” where the guy tries to help the woman away from it. Or like the kid in “Exit 194B” who’s trying hard just to get by after the death of his brother only to find his cousin
unable to. They are all kind of the same idea.

In other words, was The Fitzgerald conceived as a kind of concept album?
I guess more than anything it’s got the same mood to it. When you can’t shake a feeling then maybe everything is seen in that sorta lens. That everything thing you think about, or the way you perceive things is seen like that. And for me I guess I was just going down that path and couldn’t stop thinking like that. I have a hard time not thinking like that.

Musically, the album is incredibly sparse – is this a new direction for Richmond Fontaine or something you have been working towards?
When we got together with JD Foster [producer of Post To Wire and The Fitzgerald], and we were playing the songs to him as a band it didn’t seem to be right. He was staying at my place and we’d sit around and I’d play him the songs with just a guitar and it made more sense like that.
It was a hard decision not to have pedal steel on it, ‘cause I’m a huge pedal steel fan, but the songs were better without it. It’s an intimate sober kind of record and the steel was too dreamy and took you out of the story. But all in all I don’t think this is the future direction of the band. If it was I think the band would put concrete blocks on my feet and dump me in a river.

How do you think your songwriting has developed on The Fitzgerald – although the lyrics are really stripped down, they seem more vivid than ever.
I have to say writing “The Fitzgerald” was the most fun I’ve had as a songwriter because I could base the whole thing around the lyrics. JD was really supportive about it. I think after doing a rock record like “Post To Wire” I just wanted to hide out and be selfish and write a bunch of story songs. It was a real relief for me. I didn’t put any pressure on myself to write for the band or worry if people would like it all. I just wrote the sorta songs I like.

Are these songs wholly imagined, or are some of them based on real events – if not in your life, then in the lives of others?
I guess a lot of time I take a real life story and then make it much more dramatic. Like the “The Warehouse Life.” I used to work at a warehouse and me and this guy would get drunk on lunch break and he had a huge gambling problem. He had a bookie in Reno. If you have a bookie in Reno you’re in a mess. But he didn’t get beat up. He was threatened an awful lot, but his folks got him out of it. “Incident At Conklin Creek.” My mom’s boyfriend and I go camping a lot out in Nevada, in the desert, and we look around old mines and I remember seeing a pair of women’s underwear and a shoe at the foot of this mine. We were fifty miles from any resemblance of a town. It took us a half hour on foot to get to this old mine. What the hell were a pair of women’s underwear and a single shoe doing there? I stayed awake all that night and worried about it. I could see these horrible scenarios in my mind and those sorta situations always haunt me. That sorta darkness just worries me and eats at me. ’Cause anyone could end up there. Even you or your mom’s boyfriend.

What’s the story behind “Wellhorn Yards”, for instance – it reads like the aftermath of a heist gone wrong.
There are railroad tracks that run through downtown Reno. When you look out the window at the Fitzgerald you can see them. When I lived there in my 20s I used to get drunk and walk along them until I hit the industrial part of town and I’d sit in the dark against this wall and watch the trains. In the song I called this area the Welhorn Yards, although there’s no name I know for this area. I was pretty lonely for a lot of the time I lived in Reno. I was really shy and was really hard on myself and I didn’t fit in with my old friends. So I spent a lot time getting drunk and walking around downtown. When I wrote the song I started thinking how my friends growing up were the kind of guys who were mini-crooks, who would do these somewhat horrible things and I was
always the kid who was just drinking beer and hearing about it. I never did the things they did. I just heard about it and saw the aftermath. Like the kid in “Welhorn Yards.”

On first listen there are songs here that sound as bleak as anything you’ve written – but there’s always a sense of hope struggling to survive.
I always hope that my characters make it out all right, ‘cause in a lot of ways they are me. I hope to hell the couple in “The Janitor” live happily ever after and that the AWOL kid in “Exit 194B” makes it out all right. I hope the kid in “Laramie,Wy” nerves get better and he finds a safer,
easier life with his aunt. And the girl in “Don’t Look And It Won’t Hurt” I hope her nerves ease up and she gets stronger and can make it on her own. I hope she didn’t use up all her strength on the move, on the escape, and then get tired and cave in and go back. I like all those people. I don’t think they’re bad people or failures or bums. I think they are good people who have fallen into bad situations. But they’re all trying to be better. To get to a better spot.

You’ve previously cited Dylan, Springsteen, Tom Waits and Dave Alvin as songwriters you admire and who have influenced you to some degree. On The Fitzgerald, there are songs that remind me of Lou Reed’s more reportorial writing – am I imagining an influence that isn’t there?
Hell, I wish I could say I knew Lou Reed’s work better than I do. The truth is he’s always sorta freaked me out, and so when I’m at the record store I just kind of pass over him. But maybe I shouldn’t. I guess more than anything Springsteen and Dave Alvin and Tom Waits inspired me to do this record. I really admire those guys. They all create their own world and that’s what I was hoping to do. To create my own world.