I hadn't planned to write about the Necks show last night: plenty of other things to do; a review of Frazey Ford's album ready to publish; a sense that, after my previous reviews of The Necks, I didn't have much else to say. 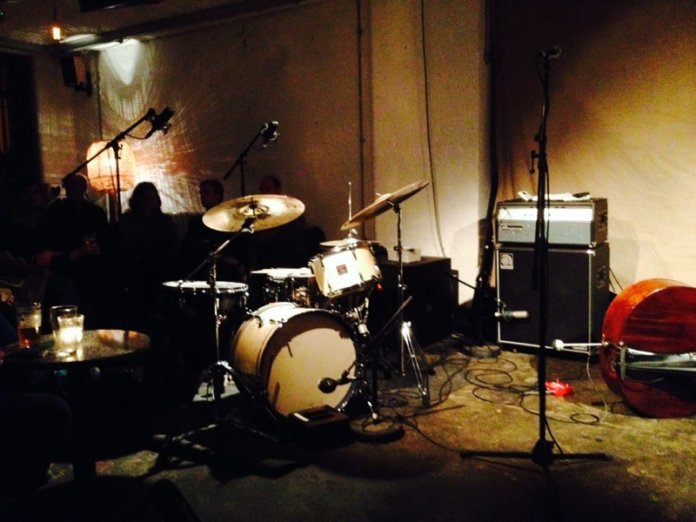 I hadn’t planned to write about the Necks show last night: plenty of other things to do; a review of Frazey Ford’s album ready to publish; a sense that, after my previous reviews of The Necks, I didn’t have much else to say.

Every time, though, works out different, and it turns out that the Australian trio might be very nearly as compelling to write about as they are to watch and listen to. For this first night of their residency at Café Oto in Dalston, the format is familiar: two sets, each consisting of one improvised work, notionally anticipated to last about 50 minutes apiece. An indication that the show might shape up in a relatively unusual way, though, comes at the very beginning. Once the three Necks have taken their places on the stage, there is customarily a minute or so of silence, that can be interpreted as meditative preparation or as a kind of brief psychic war, as Chris Abrahams, Lloyd Swanton and Tony Buck wait to see which one of them cracks first.

Tonight, however, soon after Abrahams has completed the ritual of taking his glasses off and rubbing his palms up and down his face, he jumps straight in. Though his initial gestures are lyrical, even florid, the first Necks set will be driven by his piano playing at its most wired and antagonistic, so jagged in places that it is left to Swanton to provide a lead melody by bowing his double bass.

For a band so often described (somewhat reductively) as minimalists, The Necks are strikingly dense throughout. If you’d come to the show having heard only their most recent album, “Open”, the relentlessness would be jolting: there is precious little space, no room for those persistent Eno comparisons and so on.

Even for seasoned Necks watchers, it’s pretty intense, and there are further diversions to be picked out in the melee, like Abrahams playing something akin to nonchalant blues notes for a while with his right hand, while continuing to pile up the atonal bass clusters with his left. At some point, Tony Buck breaks off from the almost martial path he’s been pursuing, albeit with some kind of bell on one of his drumskins, and starts swinging, at least with his left hand. Abrahams returns to his opening melodic moves, in more expansive form, and Swanton puts his bow back in its quiver and starts picking, furiously, eyes closed and with an expression of concentrated rapture that manifests, I suspect, how many of the audience are feeling at this point.

It’s a great Necks moment, a climax which is soon enough deconstructed as they move to an uncharacteristically swift close. The whole piece has lasted only 35 minutes. Such brevity!

The second piece is more predictable, insofar as it lasts just over 50 minutes. Again, though, it’s phenomenally intense. For a while, Abrahams sounds more like a more orthodox jazz pianist – if you could call, say, Cecil Taylor orthodox – and there is a point where he appears open to moving the piece into more lyrical, spacious territory. Buck, however, has been rattling a selection of bells and percussive detritus across the surface of his drum in an RSI frenzy, and when Abrahams presents the opportunity to ease up, he instead responds by placing a hand cymbal on there and ramping up the pace even further.

At times like this, the thought occurs as to whether a Necks performance can sometimes be a kind of competition between the three members, hermetically sealed in their own worlds (Abrahams has his back to his bandmates for the duration), but still operating in uncanny synchrony. Improvisation can sometimes become a battle of one-upmanship. But The Necks’ contests – if, of course, that’s what they are – are more subtle and passive-aggressive. There’s little that could be described as showing off, more an intrigue of wrong turns and deliberately missed opportunities; of microscopically-adjusted moves that can send a piece down a whole other trajectory. Every once in a while, I start to think one of The Necks is taking charge. A minute or two later I always, unfailingly, change my mind.