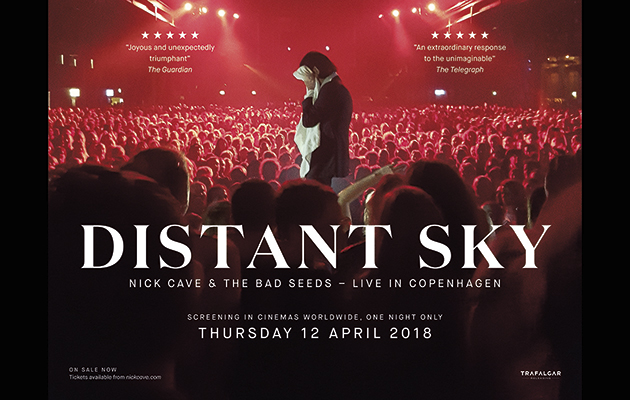 Watching David Barnard’s concert film Distant Sky, I’m occasionally reminded of that line of George Orwell’s, that at the age of 50 every man has the face he deserves. Now aged 60, Nick Cave has accumulated several lifetimes worth of experiences – both good and bad. He has dealt with most forms of darkness and death in his songs; but the loss of his son, Arthur, prodded the songwriter into exploring loss, the afterlife and grief in a new gripping depth. It’s visible during a stately “Girl In Amber”, as the camera lingers momentarily on the singer’s face in HD close up. You can see the beads of sweat on Cave’s forehead, the individual links on the silver medallion around his neck. But more importantly, Cave looks fleetingly weary. For much of the rest of this film – shot at Copenhagen’s Royal Arena in October last year – he is the consummate Luciferian ringleader, leaping, prodding, whirling and goading the Bad Seeds to thrilling states of demonic ecstasy. But here, on this track from Skeleton Tree album he looks “like a battered monument”; a rueful, blackly humorous observation he made in Andrew Dominik’s film, One More Time With Feeling. A giant backdrop, meanwhile, shows a hooded figure walking across Brighton beach.

If Dominik’s film was about the recording of Skeleton Tree and the aftermath of Arthur’s death, then to an extent Distant Sky is what happened next. Dominik’s film addressed complex and raw issues about the nature of creativity – what is art and what is an exorcism? Where does ‘Nick Cave’ – the songwriter, author and public personality – become Nick Cave: husband and father? Nick Cave – Man Or Myth? Barnard’s film, meanwhile, shows Cave and his band bringing these songs out of the studio so they may take on a life of their own. The sparse, experimental glitches of the Skeleton Tree material have shifted. What were, on record, a collection of songs frequently built around electronic loops, loping rhythms and tattered vocals are presented, live, in more romantic and mythological terms. They sound surprisingly stately – “Girl In Amber” nestles perfectly into a run of songs that also include “Jubilee Street”, “The Ship Song” and “Into Your Arms”.

What Barnard’s film also captures is scale. The Bad Seeds – incredibly, you might think – are capable of filling stadiums round the Europe and beyond. A shot from the back of the 15,000 capacity Royal Arena at start of “Tupelo” demonstrates the world Cave and his band now inhabit. Cave really flourishes here when he’s off the leash. “From Her To Eternity” followed by “Tupelo” and later “The Mercy Seat” are all tumultuous, explosive, Cave reconnecting with an earlier, berserk incarnation as he hops and jumps around the stage. The Bad Seeds, inevitably, are able foils to their leader, although their calling can sometimes be more powerful and mysterious that we can easily comprehend. Now the longest-serving members of the Bad Seeds, Thomas Wydler and Martyn P Casey perform with tidy pragmatism – what kind of mindset does it take, you might wonder, to survive over 30 years at Cave’s side, as Wydler now has? But as anyone who saw Leonard Cohen at the O2 in 2008 will attest, intimate songs can be delivered successfully even in aircraft hangers. But doing the unexpected has always been Cave’s MO: even closing your set in an arena with the becalmed, wistful “Push The Sky Away” may at first appear an odd choice, until you watch 15,000 people part whispering and part singing the chorus in unison, all making hand gestures in accordance with the song’s title.

For an artist who’s been active since the mid-Eighties, Cave – in whatever guise – has only a handful of live albums and no previous concert films in his catalogue. While for now Distant Sky follows the one-night-only model of One More Time With Feeling, it does at least capture Cave and his cohorts in full-tilt; consistently at the top of their game.