It is hard to tell where Neil Young and what we can just about call Crazy Horse end their main set in Hyde Park, Saturday night. "Rockin' In The Free World" has spluttered to a conclusion, of sorts, and the band appear to have left the stage. Then, you notice Young remains amidst the debris, pointing agitatedly at the word printed across his new t-shirt: "EARTH". 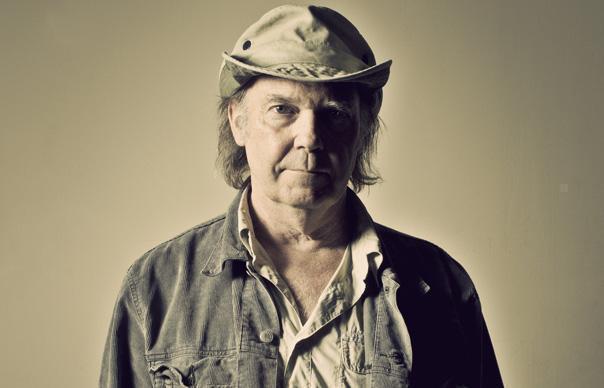 It is hard to tell where Neil Young and what we can just about call Crazy Horse end their main set in Hyde Park, Saturday night. “Rockin’ In The Free World” has spluttered to a conclusion, of sorts, and the band appear to have left the stage. Then, you notice Young remains amidst the debris, pointing agitatedly at the word printed across his new t-shirt: “EARTH”.

For the previous two hours, Young has confounded his audience once again. Last summer, Crazy Horse’s tour was a compellingly fractious affair, built around mammoth “Psychedelic Pill” noise jams that presented Young as creatively uncompromising, far from afraid of alienating some of his fans (You can read my review of the great 2013 O2 show here).

This year, the show starts in broadly similar fashion: 15 magnificently wallowing minutes of “Love And Only Love”, followed up by ten of “Goin’ Home”, plucked from the oblivion of “Are You Passionate?” and not, perhaps, one to gladden the hearts of the casual onlookers at this British Summertime festival in central London. Even in the turmoil and longueurs of “Love And Only Love”, though, there’s a different energy and focus, driven as it is by Rick Rosas, a slightly more conventional bassist than Billy Talbot, in recovery from a mild stroke. The onslaught is leavened, too, by the presence of two backing vocalists, Dorene Carter and YaDonna West, whose repeated exhortations to “Break it down” provide further structure for Young and Frank ‘Poncho’ Sampedro‘s ambulatory paths. There’s a good comparison to be made with the electric portions of the “Chrome Dreams II” tour in 2008, when Rosas again provided the security and Pegi Young and Anthony Crawford, on backing vocals, added a degree of emotional ballast. It’s not a compromise, exactly; more a way in.

Another “Ragged Glory” song follows, “The Days That Used To Be”, played with a lightness of touch that accentuates its kinship to “My Back Pages”. Soon enough, though, the show takes an uncharacteristically populist turn. For those who bemoaned the lack of ‘hits’ on the Alchemy tour, you can only hope they gave it another go this year. “After The Gold Rush” leads the charge, delivered at an engagingly sprightly pace, and then there’s a beautiful “Only Love Can Break Your Heart” (Sampedro excelling on upright piano), an acoustic singalong of “Heart Of Gold”, “Barstool Blues”, “Cinnamon Girl”, “Rockin’ In The Free World”. Not the solid comforts of Young’s Stateside acoustic shows earlier in the year, perhaps, but not 30 minutes of “Walk Like A Giant”, either.

For those of who love 30 minutes of “Walk Like A Giant”, mind you, there’s still plenty to dig into. As ever with Young, it’s impossible not to try and parse his setlist and performance to tell where, after “A Letter Home” and the acoustic shows, he might be heading next. Does that heartening exhumation of “Goin’ Home” mean that the turn-of-the-millennium Crazy Horse session from which it came, “Toast”, might finally see the light of day? Why has Young chosen to pluck “Separate Ways” – a nuanced, almost jazzy performance – from the mid-’70s wasteland of abandoned albums? Is “Archives Volume 2” is finally nearing completion?

And what of Young’s new “EARTH” shirt, on sale at the merch stands? When Young points to the shirt and the band hastily reconvene around him, it is to crunch into the night’s solitary new song, “Who’s Gonna Stand Up And Save The Earth?”, whose machine-gunned riff opens up into something quite spectacular, a fiery compatriot to “Fuckin’ Up” with a momentum only slightly derailed by an awkward, churchy chorus reminiscent of “Be The Rain” from “Greendale”. Extrapolating wildly from this righteous anti-fracking anthem, from the gentler but still aggrieved “Hole In The Sky” which surfaced on last year’s tour, and from rumours of another album in the works, it might not be a stretch to imagine a forthcoming ecological concept album.

Whatever, the continued potency of Neil Young is a wonder to behold, not least when he manages to transform what could have been a contractually expedient tour into something which is both conventionally satisfying and full of tantalising possibilities, both new and old. Beyond those monolithic solos (and that final searing flourish after the choral “Yeah! Yeah! Yeah” in “Cinnamon Girl” is better than ever tonight), it’s the range he displays tonight, the delicacy and nuance which underpins “Separate Ways”, which is most striking.

After “Who’s Gonna Stand Up And Save The Earth?”, there is time for one more, 20-minute song – a version of “Down By The River” that might rank as the deepest I’ve ever witnessed, for the dramatic highs and lows, the graceful tension, the jazzy space and nuance which is introduced into Young, Sampedro and the staunch Rosas’ tight little face-offs. In spite of all the whims and tangents, it’s at this point that a thought occurs about one of Neil Young’s most enduring skills – how his shows, his ever-evolving songs, manage to be wildly unpredictable but, at the same time, hugely reliable. If you were there, or at any other of the European shows, please drop me a line: uncut_feedback@ipcmedia.com.

Fork In The Road