Reviewed: Morrissey biopic, England Is Mine

William, it was almost something 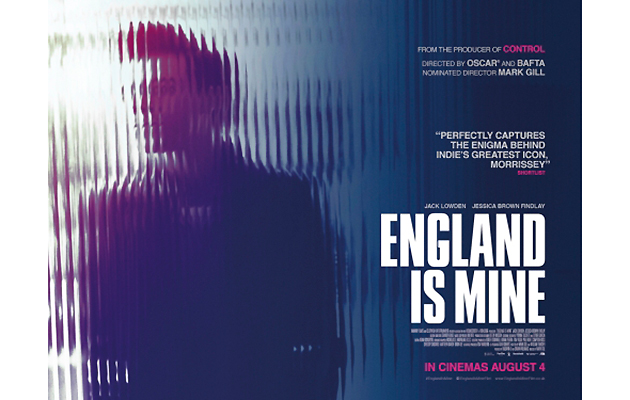 In Autobiography, Morrissey writes insightfully about his favourite films, which tend to cluster around the 1940s, 50s and 60s. “The working classes are usually portrayed as children enacting pointless working class crimes. We always see the police as adults, representing a conscience for the daft scrubbers in pubs and dance halls – who are not rich and therefore cannot behave themselves… The shadowy social films of lost Sunday television are Oliver Twist (1948) (in which career criminal Bill Sykes says, ‘There’s live enough for what I ‘ave to do!’), London Belongs To Me (1948), The Blue Lamp (1950), I Believe In You (1952) and Sapphire (1959).”

He goes on to talk about “the statuesque womanhood of comely Liz Frazer” as she goes about her nefarious plans in The Painted Smile and the “unusual glimpse of hard and pretty Michael Caine rutting lustily for his pal David Hemmings” in Two Left Feet.

There is scant reference to Morrissey’s cinephile habits in England Is Mine – an unauthorised biopic of Morrissey’s pre-Smiths years – bar one small mention. Early on in the film, the hopeful singer places an advert in his local record shop asking for potential collaborators. Among his list of ‘must like’ artists, Morrissey includes Kenneth Williams. The year is 1976, when incidentally Williams was starring in Carry On Behind – a late entry in a series bent on recapturing a bygone sort of Englishness. In his own way, director and co-writer Mark Gill is trying to evoke another peculiarly English cultural landscape with this film: that of the music scene of the industrial northwest.

We meet Steven Patrick Morrissey as a socially awkward, waspish teenager fumbling through his parents break-up, writing pithy letters to the NME and enduring futile attempts to find gainful employment. It is here that Gill’s film comes closest to Carry On Morrissey. Working for the Inland Revenue, Morrissey himself surrounded by sitcom staples: the exasperated boss, the alluring secretary, the boorish co-workers. The gags are plentiful: “Do you like audit work?” “I have a long list of people I hate.”

But Morrissey is a passive presence; the women push him on. Initially, his mother; then Anji Hardie (Katherine Pearce), a lesser-known figure in the Morrissey creation myth, who encourages him to meet Billy Duffy and kickstart his musical career. When not bantering Wilde quotes with Morrissey on a cemetery bench (yes, yes), Jessica Brown Findlay’s Linder Sterling helps him embrace life and its myriad potential.

So far, Morrissey has remained uncharacteristically silent on his views of England Is Mine. The films arrival coincides with a low point in Morrissey’s career: his pronouncements on Brexit have been troubling, even to his most ardent supporters, while the response to his first novel, List Of The Lost, did little to improve his diminished stock. Perhaps the forthcoming Queen Is Dead box set will at least act as a timely reminder of the Morrissey/Marr alliance in its imperial phase.

England Is Mine, meanwhile, is a likeable enough film; well-paced and warmly disposed towards its idiosyncratic subject. Findlay and Pearce are both strong actors (even if Findlay is playing a Manic Pixie Dream Girl archetype); but as Morrissey, Jack Lowden is essentially called upon to do an impression. Its surface tics and mannerisms and Gill, despite his undoubted fondness for the subject, never quite show us why Morrissey is Morrissey. Unlike recent biopics Control and Nowhere Boy, England Is Mine never quite brings its subject clearly into focus.

ENGLAND IS MINE OPENS IN THE UK ON AUGUST 4