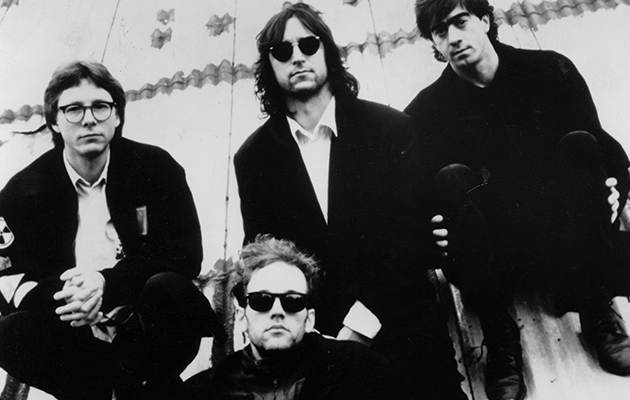 REM’s music has always been marinated in irony and here was the supreme example. Following Green’s several attempts at ostensibly big, dumb, self-consciously pop songs, the single that finally pushed them way over the top commercially wasn’t a ‘please-buy-me’ capitulation to mass sensibilities but one of their most ‘natural’ and personal testimonies, the mandolin and melody running as clear and as beautiful as spring water. There’s none of the forced extroversion that occasionally characterised REM at this time – rather, it sees Stipe agonising over the pressures and compromises of fame, the potential loss of integrity and privacy. “I don’t know if I can do it,” he declares, tottering along the fine line that has always defined REM: “I’ve said too much/I haven’t said enough.” Yet rather than REM putting on make-up and seeking out the commercial spotlight, for “Losing My Religion” it was the spotlight that sought out REM in their own dark, quiet corner, doing their own thing. And the world fell in love with them for it. That, and Stipe’s silly dance. Perfection.

PETER BUCK: I bought the mandolin at the end of 1989 and I wrote the song, the music, in about 1990, so I hadn’t been playing it that long and didn’t play very well – I still can’t really. I only pick it up to play “Losing My Religion”.

MIKE MILLS: The record company were using it as a warm-up to “Shiny Happy People”. They didn’t expect it to be a hit.

MICHAEL STIPE: ““The One I Love” was the song that had established us on radio. So, after that, we consciously put out singles prior to the album that would totally challenge radio. The idea was, let’s blow the gates wide open, knowing that radio would play whatever we did and whatever the record company threw at them, because they had six weeks before the album. So we had this clout to release these incredibly strange songs that they’d then play on the radio, which in our minds would open up radio, open up formatting, would make it available to the Grant Lee Buffalos of the world. We were being altruistic but a little cocky as well. I mean, “Losing My Religion”? There’s no chorus, there’s no guitar, it’s five minutes long, it’s a fucking mandolin song. What kind of pop song is that?

MIKE MILLS: Musically, it’s very straightforward, but there’s something satisfying about that song, in the sense of the way the sound of the mandolin combines with the chords, the appealing, evocative nature of the lyrics – and a fabulous video. I have to admit, I’m not really a great fan of videos, but there’s something about the video for that song which made its success. And you put that together and it’s kind of a fluke, but thank goodness. I’m not even sure if that song could be a single now, if it would even be selected. But it came out at the right time, the right place…

MICHAEL STIPE: They said I stole the dance for the video to “Losing My Religion” from David Byrne in “Once In A Lifetime”. But that’s not true. I actually stole it from Sinéad O’Connor. The director of that video had a very clear idea of what it was going to be. My performance took a lot from Bollywood, Russian constructivist posters and so forth – he wore his references very clearly and openly. He wanted my performance to be complete Bollywood, where I’m sitting facing the camera like Cleopatra on the fainting couch, with my legs wrapped around each other and flowers all around me and then turning in this contorted way and delivering my line. And he worked about half a day with me doing all these poses. Then after half a day he came up to me and said, “I feel really uncomfortable.” And he went to the bathroom and vomited his guts out. Then he came back and said, “I don’t know what to do.” He had this budget, all these actors, this very expensive set and it wasn’t working. I was giving everything that I had but it wasn’t working. So I said, “Turn on the camera and let me do what I do, let me sing my lines the way I would sing them.” And I didn’t have a mic stand – so I had to do something with my hands. And I thought of “The Last Day Of Our Acquaintance” by Sinéad O’Connor – and her performance in that video was fucking beautiful. So I did my version of Sinéad. And it worked.

PETER BUCK: For Out Of Time, we’d decided to turn our back on touring, even though we assumed it was going to kill our career stone dead. We had a big meeting, in which we considered if we were going to have to cut our salaries, collect on insurance for not touring. And following the success of “Losing My Religion”, the album sold 10 million copies. So we were like, “Whatever.” But I was quite prepared for it to go the other way. My feeling was that if we can’t be successful being who we are then I just don’t want to be successful. There’s nothing worse as a fan than when you see a band with a unique identity who will then give it up just to have a hit. Because what are you giving it up for? Money? Well, hey, I have a middle-class attitude towards money, I assume I can always work or something. But to sell your soul – or sell your soul and then not sell records – think about how bad that would be. And I know people that’s happened to and now, they’re like, “What was I thinking?”