Quentin Tarantino came to a crossroads in his career when he made Jackie Brown in 1997. Coming after the lary carnage of Reservoir Dogs and Pulp Fiction, his third film, adapted from Elmore Leonard's novel Rum Punch, was an unexpectedly poignant and subtle account of middle-aged people doing whatever they have to do to survive. The guns, double-crosses and gangsters were there, of course - but there were other things, too: warmth, character and nuance. 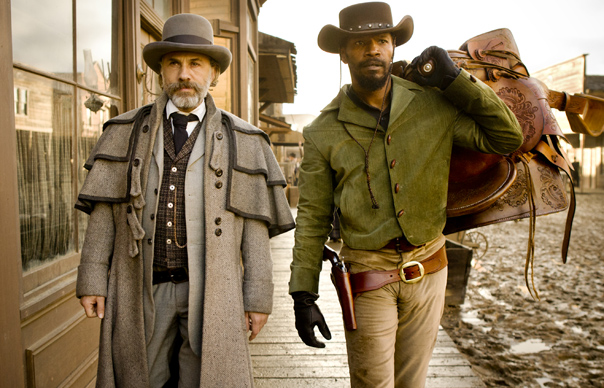 Quentin Tarantino came to a crossroads in his career when he made Jackie Brown in 1997. Coming after the lary carnage of Reservoir Dogs and Pulp Fiction, his third film, adapted from Elmore Leonard’s novel Rum Punch, was an unexpectedly poignant and subtle account of middle-aged people doing whatever they have to do to survive. The guns, double-crosses and gangsters were there, of course – but there were other things, too: warmth, character and nuance.

Tarantino could have carried along this road, gradually refining his filmmaking skills and developing a weighty body of work. Instead, his movies since Jackie Brown have grown in budget and particularly length – but barely in maturity. In some respects, it feels like the now 49 year-old man is still 25 at heart, still replaying those b-movies he watched while working at The Video Archives in his pre-fame days.

Django Unchained opens in 1858, and follows Tarantino’s now familiar mix of spliced b-movie genres, vague taboo baiting, long speeches and cameos from actors whose body of work can best be described as ‘straight to video’. Nominally, it’s Tarantino’s attempt at a Spaghetti Western. We get Ennio Morricone over the opening credits, a cameo from Franco Nero – the star of Sergio Corbucci’s 1966 Django – and, when Tarantino remembers, some tight zooms. Elsewhere, it’s slow-motion shootouts cut to a booming hip hop soundtrack.

In the main, Django Unchained is mostly an exploitation/revenge film, about a slave who becomes a bounty hunter and goes after the plantation owner who owns his wife. There is good stuff: Christoph Waltz showboats as the charming, eloquent German bounty hunter Dr King Schultz who teams up with Django, while Leonardo diCaprio has great fun as the foppish Calvin Candie, the plantation owner with high falutin’ tastes and bad teeth. Between them, they dominate the film – Jamie Foxx, as Django, looks good in a hat, burgundy coat and round sunglasses, but struggles to make much impression. The first hour or so, as Django and Schultz traipse from Texas to Tennessee and Mississippi, has a loose, picaresque feel. It’s the best part of the film, bristling with a sharp wit and driven by Waltz’ baroque rhetoric and some beautiful cinematography from Bob Richardson – Django and Schultz riding through winter snows, the allusions to The Searchers and McCabe & Mrs Miller, which suggest tantalisingly that, if he really put his mind to it, Tarantino could make a terrific straight Western. Don Johnson, James Remar, James Russo, Bruce Dern and Jonah Hill cameo. There’s a great Klan joke, straight out of Blazing Saddles.

The second half is less successful. It’s not just that Kerry Washington’s Broomhilda, Django’s wife, feels barely drawn, although ample time is spent explicitly detailing the cruelties inflicted on her. It’s not just that Samuel L Jackson, as Candie’s “Uncle Tom” who runs the plantation on behalf of his master, is ham. It’s not just that the scam Schultz concocts to liberate Broomhilda is plainly stupid. Critically, it’s just not very interesting. A dinner table conversation crawls close to the hour mark before, finally, even Tarantino appears to lose interest in his own dialogue and unleashes the big shoot-out – Django’s revenge, blood and bodies everywhere. For a filmmaker who clearly sees himself as routinely crossing the line, mixing his shit up, it’s a remarkably predictable way out for this story: creatively, it finds him taking the path of least resistance.


Django Unchained is released in the UK on Friday, January 18