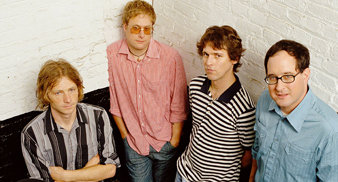 CRAIG FINN: When I moved to New York, I thought I wanted to do something other than music – writing or comedy. Instead I just started drinking. Two years into that, I saw The Last Waltz, and they looked like they were having fun. We just wanted to get together to drink beer once a week. Once we’d played a show or two, we thought we ought to have something to sell. So we made the first record.”

U: And Separation Sunday?

CF: “Rolling Stone and Spin both named ….Almost Killed Me as the best record you didn’t hear last year. I remember thinking, ‘let’s make the best record people did hear this year’. I thought, there is a lot of truth and beauty in my version of Catholicism and I wanted to create a story that explains some of how I feel.

U: You repeat yourself a lot.

CF: “You know you have friends that when you get drunk, you always talk about baseball? It’s the stuff I always think about. It rewards heavy listeners! I think Jay-Z calls them ‘chestnuts’.