Nico, 1988: “She was a very complex, contradictory character” 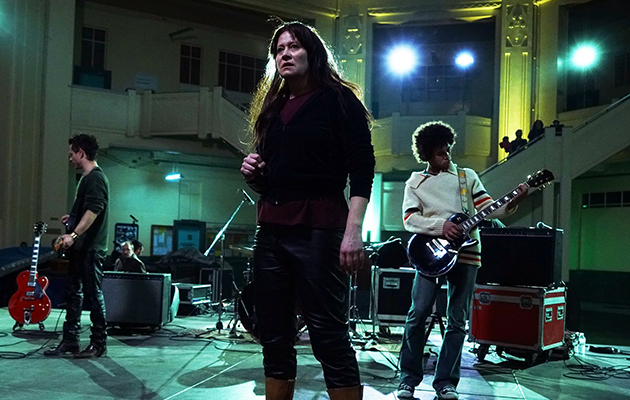 In 1980, Nico – the German singer born Christa Päffgen – relocated to Manchester. Drawn to the city by the thriving drug and music scenes, she assembled a new band and embarked on a series of disastrous overseas tours. As it transpired, these tours assumed a valedictory quality: Nico died in 1988 following an accident in Ibiza.

This curious third act of Nico’s life  is the subject of Nico, 1988 – a new biopic by Italian filmmaker Susanna Nicchiarelli and starring Danish actress Trine Dyrholm as the singer. Accompanied by her unruffled manager (John Gordon Sinclair) and a band comprising a “bunch of amateur junkies”, it is a film composed of on-the-road yarns: the problems scoring heroin overseas; encounters with fearsome Soviet-bloc authorities; a precarious rendezvous with a hotel jazz band. In Nicchiarelli’s film, the tour snakes through Eastern Europe, a setting both star and director agree is puissant.

“Nico was born in ’38, right before the Second World War started, and she died in ’88, one year before the Berlin Wall came down,” says Dyrholm, whose credits include Festen and The Commune for director Thomas Vinterberg. “I think being German was a big deal for her.  She was from a generation that experienced guilt about the war.”

Nicchiarelli’s research began in Manchester, where she met with Nico’s former manager, Alan Wise, who subsequently introduced her to Ari – her son with French actor Alain Delon. The relationship between Nico and Ari became a critical part of Nicchiarelli’s story.

“I found it very moving, he has no resentment regarding his mother,” she says. “His father is a different story. But even though Nico abandoned Ari – at one point, his grandmother even took custody away from Nico – the way he talks about  his mother is incredible. He says,  ‘I thought she was indestructible.  I thought I was going to die before her.’ When they got back together  and Ari joined Nico’s band, they had  a very strong relationship. She knew she had damaged him somehow, and she knew that very well.”

Part of this story has already been documented by James Young, a member of Nico’s band during the ’80s, in his book Nico, Songs They Never Play On The Radio.  “It is a great book,” admits Nicchiarelli. “But it is basically the story of James Young and his experiences as a keyboard player, while I wanted Nico to be my main character and to foreground her relationship with Ari.”

Meanwhile, flashbacks of Nico during her Warhol years are taken from Jonas Mekas’ vérité documentaries Scenes From The  Life Of Andy Warhol and Walden:  “I decided to set this dialogue with the audience,” says Nicchiarelli.  “I show you the real icon and then  I show you my film.”

For Dyrholm – a one-time Eurovision contestant – the route to Nico was through her voice. “She has all these blue tunes and she doesn’t sing well,” she explains. “So in the beginning I was singing too well and we tried to trash it a little bit! But she was a very complex, contradictory character. She was asked once whether she had any regrets and she said, ‘Only that I was born a woman, not a man.’ That was a big issue for her. She was a beautiful woman, part of Warhol’s world where everyone had an image, but she wanted to be much more.”