Late Saturday afternoon, I was sat at the computer checking football scores when I received an email from Mark Golley, as passionate and assiduous a Neil Young fan as I’ve ever come across. “Check out the front page of neilyoung.com,” it advised. 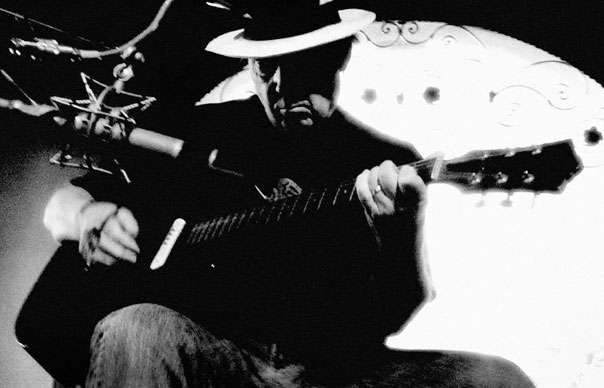 Late Saturday afternoon, I was sat at the computer checking football scores when I received an email from Mark Golley, as passionate and assiduous a Neil Young fan as I’ve ever come across. “Check out the front page of neilyoung.com,” it advised.

What was posted there turned out to be 37 minutes of new music by Neil Young and Crazy Horse, accompanied by a long slow pan around an empty studio, the camera picking up clues every few minutes.

There are a bunch of lyrics and song titles, for example: “This Land Is Your Land”, “She’ll Be Coming Around The Mountain”, “Oh My Darling Clementine”, “Oh! Susanna”, “Gotta Travel On (Done Laid Around)”, “Gallows Pole”, which seem to confirm the story that broke last week about Crazy Horse reconvening for an album of vintage Americana. There is footage of the mixing desk, which shows the channels allocated to each bandmember, indicating that Frank ‘Poncho’ Sampedro is back in the fold.

The music, though, is something else. Initially, it wasn’t clear when these jams, expansive even by Crazy Horse standards, dated from. Sometime on Sunday, though, a credits box appeared: “’Horse Back’. Engineered and mixed by John Hanlon at Audio Casa Blanca Jan 6, 2012, assisted by Mark Humphreys and John Hausmann. Video by Ben Johnson. Music by Crazy Horse.”

What “Horse Back” seems to be – though of course one can never be sure with Young – is an elevated warm-up session for the Horse. It consists of two tracks, a free-ranging 18-minute jam that contains elements of, at the very least, “Fuckin’ Up”; and a ravishing sit-down slow-burn through “Cortez The Killer” that ranks as one of the best versions I’ve heard of what may be conceivably Young’s finest song.

The easy description of all this is that it sounds like quintessential Crazy Horse, or how many people imagine what Crazy Horse sound like in the abstract: recumbent, transported, possessed with a kind of intuitive ragged grace that renders most discussions of technique, aptitude and so on redundant (Ralph Molina’s quixotic approach to timekeeping is particularly evident around the 32-minute mark).

More specificially, it reminds me of “Broken Arrow”, a rather undervalued Young album that I’ve always liked a lot, not least because the first half especially has the looseness, adventurousness and elemental heft that I value most in Crazy Horse. If “Horse Back” were to be an actual album it would, far from a throwaway, be a deeply satisfying one to add to a latterday Young catalogue that feels increasingly rich as well as capricious..

The amount of stuff like this that Young must have stored in his archives is mind-boggling, and it occurs that he could judiciously start pumping these sessions out as paid-for downloads via his website; as expansive deep footnotes to the Archives programme, maybe. Whatever will a 2012 Crazy Horse in this mood make of “Gallows Pole”?

Couple of things while you’re here. First, check out the new issue of Uncut, which features a fine David Cavanagh meditation on “Harvest” at 40, among other things. Secondly, I went to see Michael Chapman and Dean McPhee play at the Lexington last night: blog review here today, tomorrow morning at the latest.