Uncut chills out on day three of The Great Escape festival 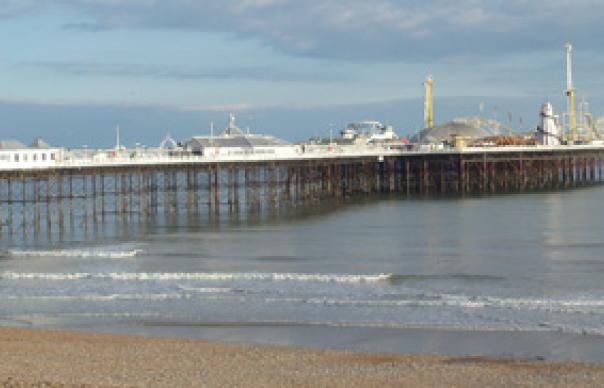 And so to day three of The Great Escape.

It’s a late start to the day, and Uncut is awoken to a message to get down to the Theatre Royal, where The Noisettes are playing a secret show ahead of their gig tonight at the Beach Club. There is dancing on the Theatre’s balcony. Unfortunately, the Cup Final has just started, and it’ll be over before I can get there. Apparently they were brilliant fun. The surprise shows that have been springing up all over Brighton have been a treat, and make it feel more like a proper festival, just in a concrete town-shaped field. Though it’s annoying when you miss something cool!

Trying to cover the whole festival, and getting a taste of as many bands as possible has not been the easiest of tasks. It would be possible to come down and just see bands, actually stay for entire sets and just relax and enjoy it. But where’s the fun in that? These are short showcases (bands play for a maximum of 30 minutes). The festival is an opportunity for new bands to get exposure, and for old bands with new material to test. Dipping in and out of venues is kinda how it’s meant to be. I think.

Tonight there are a couple of fairly established bands playing amongst the 100 new acts, like The Magic Numbers and British Sea Power, but I have an inkling I’ll be spending quite a bit of time at the Uncut café tonight. The haunting Alberta Cross and country maverick Micah P Hinson are both appearing. And I’m definitely intending to make time to take a pew to see all what they have to offer. But as they are not on till a bit later, I go out of my way to immerse myself in a random selection of genres.

First up, I see an electro outfit called Neoon Plastix, a bunch of kids from Doncaster. The singer with his shouty vocals and random rave noise-making machine definitely looks and sounds the epitomy of hi-NRG nu-rave by numbers. The guitarist wears polka dots and the drummer a t-shirt with a big neon ‘OK!’ written on it. When they stop to talk between songs, they sound ignorant, shattering the illusion of the great mouthy arrogance of the songs.

They’re OK, but enough of that. I head up to the Red Roaster, which I keep mistakenly calling the Red Rooster. Opening act for the final night is singer Dan Mangan and he has just finished. Trio Alberta Cross are setting up their equipment at the front of the room, and the place is full to capacity yet again. People are coming up with all sorts of excuses as to why they should be let in ahead of the queue, and the ones inside are all scrambling to get copies of the band’s album autographed.

They play an acoustic set, moving unannounced from their quiet jamming soundcheck straight into the start of the set with ease. The bareness of the instruments makes their songs seem even more startling and starkly brilliant. The floppy-haired, hat-wearing singer stops between songs to gulp down red wine which is located beneath the Viscount keyboard/organ. By the end of the second track, the room feels like a church, with us all sitting on the floor or at tables, listening to the country gospel hymns that Petter and Terry sing.

He’s often compared to a younger Neil Young, and the similarities in voice are definitely present. They play shortened, stripped-down versions of “Lucy Rider” and “Hard Breaks” because they don’t have a lot of time left to play. Both songs are absolutely heartbreakingly good. They finish with “Old Man Chicago” with a plug for their debut album “The Thief & The Heartbreaker” and leave the whole room foot tapping with delight.

It’s 9.15pm now, and I have a difficult decision to make, I want to see the electronic indie of Maps at the Udderbelly, yesterday’s Uncut headliner Jack Penate is playing a second show at the Beach Club, and tipped band Mumm-ra are on at 9.30 down by the sea. Practically, I head for Maps as it’s just across the road from the Red Roaster.

I’ve wanted to come to the Udderbelly since Thursday, assuming it’s an outdoor stage because it’s a giant inflatable purple cow. Alas, no. Once through the Moo Garden with its Moo Bar and Moo Loos, I’m lead up a ramp and into the BELLY of the cow. It’s brilliant inside, and a bit disconcerting. It’s dark, apart from the purple and pink lights in the pseudo-smoke, and it turns out the venue is running behind schedule. New EMI signings Tiny Dancers are still performing, and the singer’s peroxide blonde hair is the giveaway. They play a track called “Ashes And Diamonds” which is a bog standard indie track dressed up with a twang of country. It starts off nice enough, but doesn’t seem to go anywhere. They finish and dismantling their equipment seems to take a very long time. As well as the usual instruments, too many cuddly animal toys and balloons seem to have been used as props.

Nottingham music man Maps I really want to see, but now I’m completely off schedule if I want to see other bands. There’s a lot of keyboards and pedals etc that the band need and I’m getting restless watching everything get plugged in, I’ll just have to skip it and hope that Mumm-ra are running late too. So I dash to Audio, back on Marine Parade.

As expected, it’s a ‘one in one out’ gig, and the bouncers say no, so now I’m off to Kabuki at the farthest end of the seafront. Neil’s Children are on at the venue hosted by Artrocker magazine. The band who don’t consist of anyone called Neil, are playing in the corner of the downstairs of the bar. The bar is packed. And none of us can see anything. Every now and then I glimpse a fringe or their drummer’s fantastically huge black hair style. Good job their music is loud and full of strong guitar riffs. “Another Day” is very thrashy Clash-y and “Window Shopping” is pretty good too. They also play upcoming single “You Didn’t Care”, which apparently former Creation Records owner Alan McGee has described as “the Cure for the now generation.” Not quite sure they sound like the Cure, though. Neil’s Children stickers are stuck to everyone in the room by the time I leave the sweatpit. I have to dash back to the Red Roaster, ‘cos Texan guitarist Micah P Hinson is due on shortly and I’ve been warned it’s going to be busy.

I see some strange road signs on the way; I chuckle at indie band Good Shoes’ “Morden Life Is Rubbish” the first time I see it. The indie band are playing tonight at the Pavilion Theatre, I might have time to get there after Micah. The other is “This way to Cirque Surreal” – turns out to be the Bangkok Lady Boys show in a circus tent that’s been sold out every night this week.

10.26pm. Café is crammed again, right down to the front, the anticipation-charged hush is a strange feeling after just rocking at Kabuki. Micah P Hinson, with his name embroidered on a leather guitar strap, and navy trucker’s cap is joined by musicians Nick Phelps on banjo and Jason Nevilles on drums.

The laidback atmosphere is brilliant. Micah plays acoustic tales of abstract woe, and transports the people in the room to somewhere in the desert wastelands in the old days. He plays a song, “Beneath The Road”, which he says when he first recorded it, came out sounding like a hip-hop record. This gets a massive laugh, and is the beginning of a constant interaction with his audience.

He sings a short, almost ode-like song about having ‘no worries now’ before warming up to playing real twangy country notes on his guitar, with a song inspired by the Carter Family. Micah starts mumbling to the crowd that “the Carter Family practically invented Country & Western music. If you’ve never heard of them, you really should check them out.” His Southern drawl whilst he’s tuning his guitar is amusing as he says, “Oh am I rambling. I do apologise.” The enthralled fans giggle.

He plays an old track, “Digging The Grave”, before he stops to light a cigarette. He smokes using a small black holder and he places it in the side of his mouth. And then he carries on singing the next track. Whilst still puffing smoke. A very bizarre but clever sight. He sounds grittier and more bluesy now.

Alas, the show is about to end, and Micah claims he only has three minutes left to play. ‘Oh No’ shout back the crowd. Bartering goes on between the crowd, Micah and the sound engineer, and eventually it’s agreed that two more songs can be had. Great!

He sings “Leaning Guides” then treats us to a brand new track, that they’ve practised live only once before. “There’s Only One Name” is a really countrified song, with great lyrics, and for the last track of the night – is nicely upbeat. But yes! They’re squeezing in another song for us! More precious time is being lost with Micah lighting a cigarette for Nevilles and himself and still bantering about feeling like ‘the three Stooges’ up there. They then play the brilliantly named song “The Day Texas Sank To The Bottom Of The Sea.”

And that’s it, no more singers or bands on my agenda tonight. It’s 11.20 and there are some Great Escape gigs still not finished and plenty of parties erupting all across Saturday night Brighton. However, I feel far too chilled out from the brilliant musical treats of the Uncut café tonight. I think going to a party at the Ocean Rooms where I hear Razorlight are DJing would just spoil it a little.

Brighton, it’s been a blast.