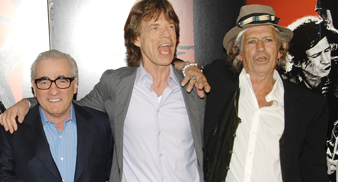 “THEIR MUSIC IS PART OF MY LIFE…”

With Shine A Light released next week (April 11), MARTIN SCORSESE talks exclusively to UNCUT about the Rolling Stones…

So why did you want to make a documentary about The Rolling Stones?

SCORSESE: The idea wasn’t to make a documentary film, it was to capture the performance. I’ve always said, from when I first heard their music, “I’m gonna get that on film some day.” It only took 40 years or so, but what can I say? And suddenly it happens. The process of making the film was actually what I enjoyed about it, because every time we started shooting it or editing it, it was a constant reaffirmation of a kind of passion or inspiration for me. So I guess it rejuvenated me in a way. It keeps the energy going for me, creatively.

You also made The Last Waltz, another performance movie. Are you as interested in that as you are the music itself?

Music and performance are a primal form of communication, even more so than many other kinds of visual media. It’s about a performer, him or herself, in relationship to the audience. There’s something about that that crosses all barriers of cultures.

So why the Stones?

For me, their music is part of my life, particularly during the ’60s. I’d never seen the band perform until maybe the early-’70s. I experienced this music by seeing it in my head, by listening to the records. I saw a few clips, maybe, on The Ed Sullivan Show, but that was different. Anyway, the chords, the vocals, the entire feel of their music inspired me greatly. It became a basis for most of the work I’ve done in my movies, going from Mean Streets on through Raging Bull, all the way up through Casino to The Departed.

Why did you decide to call it Shine A Light?

It was the first one we thought of. It can mean “Shine A Light”, the song – I love that song, and, actually, it was in the first night’s concert – but it also refers to the Beacon Theater, shining a light in New York and just the magic that happens there on that one night.

Was it easier to direct than The Last Waltz?

We were actually able to capture some of the images in The Last Waltz in a more controlled way, because the movement of the performers was so limited. Here, I knew the basic five or six cameras that were giving us the core of the work. The other cameras were back-up for focus and also in very difficult positions, for getting reverse shots and angles, that sort of things – the shots of Charlie Watts. So we knew our positions, and we also knew the songs, so when I was looking at 16 pictures on the monitor, with two headsets, I knew somebody had to be on Charlie, somebody had to be on Ronnie Wood. You miss some of it, obviously. The amazing thing is, the show starts and within two seconds it’s over. It’s over. It’s like “What happened?” They’re out. Ohmigod, we got it on film, but what happened?

Did you really get the setlists at the last minute?

Well, it felt like the last minute. Actually it may have been about an hour or so before the shows. But after the first night, we kinda knew. Kinda knew. But that’s the enjoyment – that’s the tension of it. I would think – I don’t know, because I didn’t go backstage, I didn’t see what was happening – those guys get together and see what they’re feeling like at that moment, and get a sense of what the audience feels like, and what the temperature the concert’s going to be. They can tell better than we can, and they might change the first song at the last minute. So they weren’t able to tell me until maybe a couple of hours before when, through some chicanery, somebody got a setlist, somehow. But it felt like I got it at the last second. But by that point we had our cameras in position, we were ready and that was part of the excitement of it. We heightened it in the film a bit.

How important is music to your films? You use quite a lot of it…

It’s rooted in the music I’ve been listening to throughout my life. Different types of music create an atmosphere in my mind. It translates to images and camera movements that invariably find themselves in some of my films. Often I choose a certain type of music to listen to while I’m thinking about the film. Usually I go away to a hotel somewhere, for about five or six days, and just play music and spend time alone with the script, drawing pictures and coming up with ideas based on the music. The music can be as varied as classical music, some jazz, rock’n’roll – in the case of Mean Streets, Casino and GoodFellas. But also, it’s much more complicated than that, because sometimes I play the music on the set so that the camera movement moves perfectly with the time, the beat, the rhythm of the music.

Can you give me some examples?

In the case of Casino I listened to a great deal of Bach. In the case of Kundun, Messiaen, the composer. It goes on like that. Different types of music inspire different ideas, or create an atmosphere.