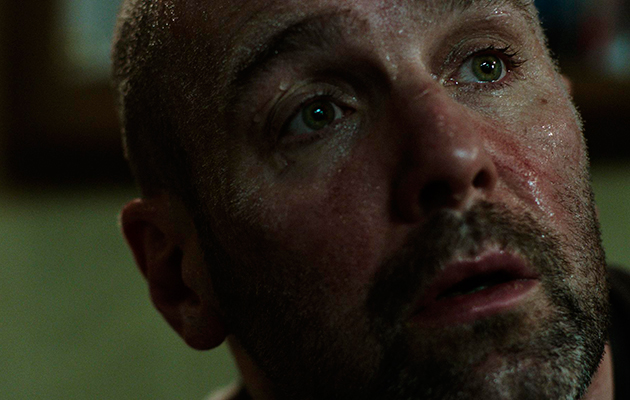 There is a scene late on in Jawbone where Jimmy McCabe, a former youth boxing champion fallen on hard times, articulates his deepest anxieties. “I’m a fighter,” he says, “But I can’t fight this.” By “this” he means alcoholism, but he could equally be talking about any of the other troubles that gnaw away at him during director Thomas Napper’s impressive, if bleak, debut.

Jimmy is played by Johnny Harris, who also wrote the script. Jimmy appears in every scene – a hornet’s nest of internalized rage and self-loathing. When a meeting with officials to discuss his housing situation goes badly wrong, it takes three policemen to subdue him. Jimmy finds some respite in the gym where he trained as a youth and the people who work there – kindly owner Bill (Ray Winstone) and corner man Eddie (Michael Smiley). Leading a precarious, hand-to-mouth existence forces Jimmy to make extreme choices, and he signs on for an unlicensed fight, brokered by Ian McShane’s vulpine promoter, Joe. 10 rounds for a £2,500 pay day, whatever the result. “You were one of the bravest kids I saw,” says Joe. “What I don’t know is what kind of knick you’re in now.”

Like Steve McQueen’s Shame or Gerard Johnson’s Hyena, Jawbone is an intense and close-up depiction of a scarred individual going about his business with, largely, disastrous consequences. Paul Weller’s atmospheric, electronic score, meanwhile, adds a discreet frisson of tension. Harris is brings to the role the same fierce commitment that characterized his performance in Shane Meadows’ This Is England cycle. There is equally strong work from the supporting cast, particularly Michael Smiley as the loyal, principled Eddie. Inevitably, there is much that is familiar here – the down-at-heel boxer taking one last fight – but by maintaining such a tight focus on Jimmy himself, Harris and Napper have succeeded in creating a persuasive portrait of a man, reduced and on the edge, desperate for a way out.