Following on from my blog about Quentin Tarantino's favourite records, I thought I'd post another QT-related titbit, from 1994. In a previous life, as film editor at Melody Maker, I commissioned Jarvis Cocker to review Pulp Fiction for us. Here, then, is Jarvis on Tarantino's early masterpiece... 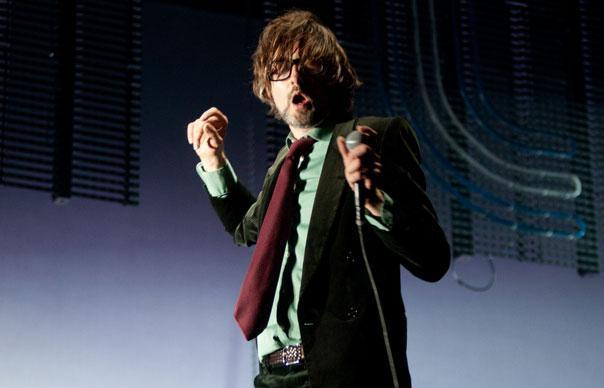 Following on from my blog about Quentin Tarantino’s favourite records, I thought I’d post another QT-related titbit, from 1994. In a previous life, as film editor at Melody Maker, I commissioned Jarvis Cocker to review Pulp Fiction for us. Here, then, is Jarvis on Tarantino’s early masterpiece…

“So I was hanging from this ledge by my finger tips and I thought, ‘Hold on, this is a dramatic situation – potentially life-threatening, in fact – so why doesn’t it feel dramatic?’ Well, it’s obvious, isn’t it? There was no orchestra, there were no close-ups of my fingers slipping, no low-angle shots from below – in short, it wasn’t a film. In the drama stakes, real life comes a poor second. Yeah, I mean I’ll cry if Humphrey Bogart leaves Ingrid Bergman but I’m f***ed if I’m going to cry when my girlfriend calls me a c*** and runs out of the house. Oh no.

“I suppose it hasn’t always been that way. They say that when the first showed a film of a train coming towards the camera head on, people ran out of the cinema because they thought they were going to get run over. Film was the most accurate method yet that man had found of capturing and representing the real world – and, now, with the advent of sound and colour, it’s even better.

“But the fact is, film isn’t devoted to representing and mirroring real life anymore (if it ever was) – the things that we see and hear on the screen actually affect the way we live and perceive our lives. Hmmmmm. So that’s why my window ledge experience wasn’t dramatic because, when I’d seen the same kind of thing before on telly, it was done a lot better.

“Now, don’t get me wrong, I’m not trying to put us all on a downer trip here, y’know. I’m not saying, ‘Oh God, we may as well all commit suicide because reality will never live up to expectations that we’ve gleaned from the silver screen.’ Oh no, I’m not saying that at all – what I am saying is that we cannot pretend that our lives are not affected by films of TV, that it somehow just rinses straight through us, leaving no residue behind. God, if you cut us open, we’d be as furred-up as a 40-year-old kettle (oh yes).

“‘So where is this leading us?’ you ask. Well. I’ll tell you where it is leading us, it’s leading us to an appreciation of Quentin Tarantino’s latest film, Pulp Fiction (great title). A film that is aware that you’ve been to the pictures before, that maybe you have certain expectations of the movie. Is there anything more insulting that those horror films where the Burgermeister (or whatever his name is) says things like ‘Vampires? Don’t be ridiculous, that’s just a lot of superstitious mumbo-jumbo,’ when you know full well that in 10 minutes’ time everyone will be getting their throats ripped out, because otherwise you wouldn’t be watching it in the first place? Or when the woman in the spooky old house does down to the cellar on her own and point blank refuses to turn the lights on? I mean, Jesus, we might be a bit gullible but we’re not totally f***ing stupid.

“In his film, Tarantino (we’ve only met him once, so I can’t really call him Quentin, can I?) takes stock movie situations (boxer is told to ‘take a dive in the fifth’, gangster has to take his boss’s wife out to dinner, etc) and then does something very simple and yet very clever: he makes them act like real human beings. And what exactly do I mean by ‘human beings’? Well, people who watch television of course. So when Jules the gangster is in the middle of the hold-up he says, ‘We’re gonna be like three Fonzies. And what’s Fonzie like?’, he receives the reply, ‘He’s cool.’ This is infinitely better than just having him say, ‘Be cool.’ There are numerous other examples throughout the film, my own personal favourite being when a kid with a bit of a wedge haircut is referred to as ‘Flock Of Seagulls’ immediately prior to being blown away, and, no, these aren’t just ironic, ‘kitschy’ (God, I hate that word) little reference point – they make the characters live.

“I think that Tarantino is doing in this film is saying, ‘OK, so my life isn’t really as exciting as the movies but at least I can take the movies and shave a bit of my own life into them,’ and, if your life is littered with references to shitty TV programmes and the like, it doesn’t matter, cos everybody else’s is too. And, in the end, that’s what makes this film so good. It delivers all the plot, fights, sex, etc, that any self-respecting film should but the best bits are the conversations – the bits that you could have just overheard in the pub, the normal, everyday bits that you or I could have said. Pulp Fiction might just be the nearest we ever get to being in the movies.”