The singer celebrates a triumphant year for his band – and a free bus pass! 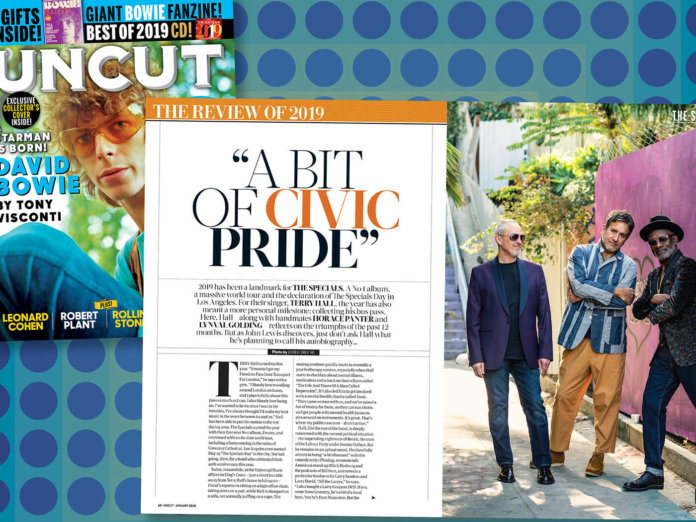 The current issue of Uncut – in UK shops now and available to order online here – features a candid interview with Terry Hall, as he looks back over a triumphant year during which The Specials enjoyed both a 40th anniversary and a No 1 album with Encore.

“A lot of things open up if you get a No 1,” he tells Uncut’s John Lewis. “You get to go on BBC local news if you want. If you get a No 3 record, not so much. It tied in nicely with the 40th anniversary, and the dates grew and grew – I think we did 70 or 80 dates this year. So it’s been hectic and very, very tiring – there was a lot of moaning from knackered sixtysomething men! But it was all good.”

In June, The Specials celebrated their 40th anniversary by playing four nights at the ruins of Coventry Cathedral. “The only thing they’ve hosted there was some murder mystery thing, where someone pretends to be the butler or something,” says Hall. “But the gigs were really lovely – a real event. A bit of civic pride.”

The singer reflects on how The Specials’ audience has changed in the 10 years since they reformed: “After the 30th anniversary, there were a lot of blokes, like a football crowd, but in the last 10 years it’s really changed. Especially in America. We’ve even noticed women in the audience. Women! That’s like, ‘Woah, what are you doing here?!'”

As well as all those group milestones, 2019 also saw Hall turn 60 – a moment he’s been looking forward to all his life. “I’ve wanted to be 60 since I was about 27, because at that point everything I liked was being performed by 60-year-olds like Andy Williams, Tony Bennett and Frank Sinatra,” he says. “I love how they’d carry on doing what they do. You have to shut everything out to do that. I feel blessed to have reached that stage. A lot of people think that 60 is part of the downward spiral, which it is if you allow it to be, but you can fight it and say, no it isn’t, it’s just part of this story.

“It means I got my Freedom Pass from Transport For London,” he adds with a grin. “I bloody love travelling around London on buses, and I plan to fully abuse this pass as much as I can. I bloody love being 60… I’ve always thought I’d make my best music in the years between 60 and 70.”

You can read much more from Terry Hall and The Specials in the new issue of Uncut, out now with David Bowie on the cover.