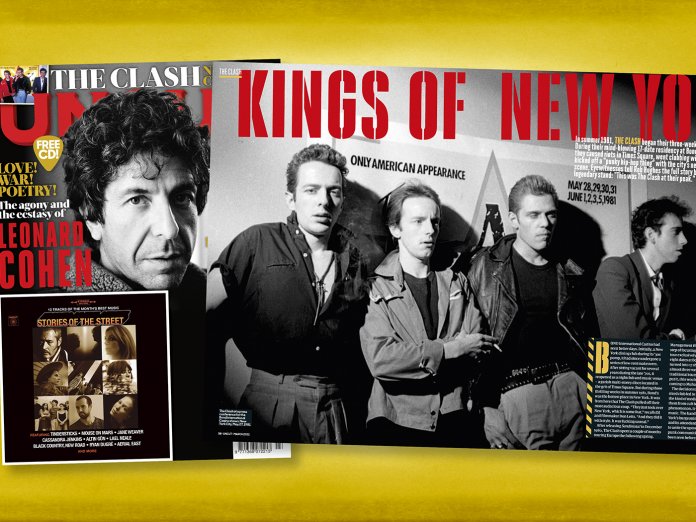 The new issue of Uncut – in shops now or available to buy online by clicking here, with no delivery charges for the UK – features an astonishing oral history of The Clash’s 17-date residency at Bond International Casino in New York, during which they caused riots in Times Square, went clubbing with Robert De Niro and kicked off a “punky hip-hop thing” with the city’s newest underground scene. Here’s a little taster:

DON LETTS (DJ/filmmaker): They were like four sticks of dynamite on stage. It was a beautiful thing to see these guys in sync. Off stage there was some friction here and there – a clash of identities, because they were very different people – but on stage it was like the whole Magnificent Seven thing. You do the fucking job. You draw fast, shoot straight and don’t hit the bystanders.

CHRIS SALEWICZ (NME journalist): I hadn’t seen The Clash for some time and I was stunned by their energy on stage. They were really firing, I’d never seen them as good or as powerful. I was there for about nine shows and the whole thing was just steaming. It was all part of how they just took New York. You’d turn on the TV and there’d be Joe and Paul, like some kind of royalty.

JOE ELY (singer-songwriter and guest artist): The sheer power of those shows blew everybody away. Of course the songs were good, but they were showing no mercy. That got around town, which only made the mayhem bigger and louder than it already was. Then there was the social scene that always goes with music events like that. Afterwards everyone would hang out at the Gramercy Park Hotel or another one down on 8th Street. Or the Chelsea Hotel, which was Joe’s favourite because it had so much history.

CHRIS SALEWICZ: There was a bar across the road from Bond’s called Tin Pan Alley, which had been used for one of the scenes in Raging Bull. That became Clash Central for three weeks. Joe and Kosmo [Vinyl, The Clash’s right-hand man] would hang out there. It was run by a lesbian bankrobber, which all added to the weirdness. At one point I remember meeting Robert De Niro and Martin Scorsese, who both thought the whole Bond’s thing was fantastic. That’s how The Clash’s appearance in The King Of Comedy came about. One night, Mick threw a birthday party for [girlfriend] Ellen Foley at Interferon. I remember looking over at Joe and Mick and they just seemed like blood brothers, really tight. They were really enjoying themselves in New York.

DON LETTS: There was a club called Negril that we all used to go to, where Kosmo used to DJ. That’s where we met Rick Rubin, The Beastie Boys, Russell Simmons and Afrika Bambaataa.

PEARL HARBOUR (DJ/singer): The Beastie Boys would be drinking backstage and smoking. They were so young then, just funny guys who were all bowled over by The Clash. John Lydon was a good friend of Paul’s at that time, so he was with us a lot. We’d go to lots of different bars, drinking cocktails we’d never heard of, like Brandy Alexanders – chocolate milkshake with brandy.

PENNIE SMITH (photographer): Everybody popped in all the time, it was mayhem being around The Clash. I remember Scorsese having an oxygen cylinder sitting on the settee. I think he was asthmatic. I took a picture of De Niro talking to Strummer. He was just as much a fan of Joe’s as the other way round. It was a sort of parallel universe.

PEARL HARBOUR: De Niro and Scorsese came out with us a couple of times. Scorsese took us to a really posh Indian restaurant with [then-wife] Isabella Rossellini. When we were all sitting down for dinner, Joe said to Isabella: “Does everybody tell you that you look just like Ingrid Berman?” She said, “Yeah, that’s my mother.” Joe got so embarrassed, because he didn’t know. That was sweet. She and Scorsese thought it was cute. De Niro took us out clubbing one night and also gave us free tickets for a boxing match. He had these fancy $100 seats. I think he just wanted to show us a good time. He became a friend after that. He and Christopher Walken came to visit us in London not long after. We took them out with Joe and Kosmo and all got drunk at Gaz’s Rockin’ Blues. That all happened because of New York.

You can the full story of The Clash’s 1981 Bond Casino shows in the March 2021 issue of Uncut, out now with Leonard Cohen on the cover – buy a copy here!